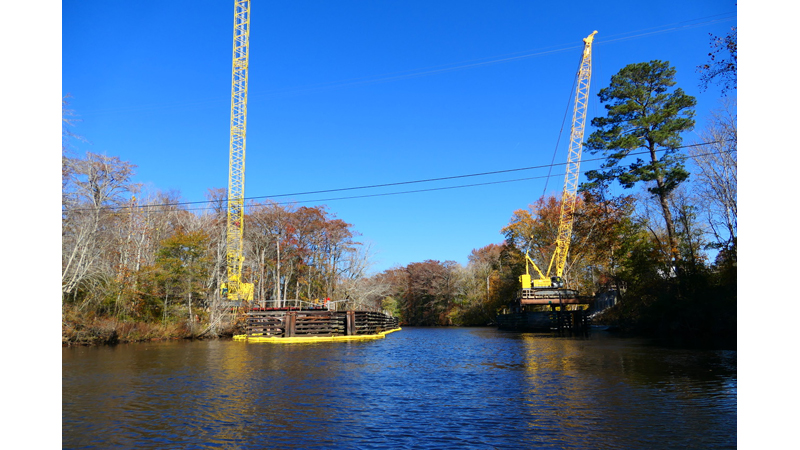 Blackwater Nottoway RiverGuard Jeff Turner captured this view of the bridge replacement at South Quay Road/Route 189 during his Nov. 19-21 patrol on the Blackwater River below Franklin. (Photo submitted by Jeff Turner)

Spirit of Moonpie and I spent November the 19th through the 21st on the Blackwater below Franklin. The water was low and 52 degrees. The average for the date according to my data is 51.4. Air temps ranged from 32 to 63 degrees. I saw no water quality issues other than lack of rain and the tons of leaves making it hard to fish… and run the big motor.

Trash on this trip was nonexistent… which is nearly unheard of on this part of the river. I did pick up a large trash can and bicycle tire and rim and a couple shotgun shells floating, but that was it. I’d like to think it was because people have stopped littering, but I know better. It just means we have not had enough rain to clean out the ditches in Franklin lately. The next huge rain we get will certainly cause a terrible mess on the Blackwater. I will, of course, let you know about that!

The fishing on this trip was unbelievably good. I caught plenty of bass, and the chain pickerel were really biting. I caught nearly all the fish on a #3 Mepps white tail spinner. None of the bass were more than 2 pounds, but I caught some big chains. The fish were hitting way out from shore, I guess because the shore was way out due to the water being so low.

Well, the old Route 189 bridge is completely gone now. The river looks really funny without that old, rusty steel thing spanning the river. I’m really not going to miss it, though. It was not a bridge one could get under to get out of storms, and it was as loud as a herd of elephants when vehicles went across that metal grate that was part of the swing-bridge part of the structure. I’m looking forward to the day I can shelter from electrical storms under it instead of having to hang around the Franklin bridge during the threat of such storms.

Yes, wild turkeys are very mean, spiteful, devious even. Every time I camp at my spot on this river the darn wild turkeys torture me each morning. This time they even staged both afternoons right across the river for their early morning assault on my sleep. That’s right, I sleep late ’cause I stay up late. The Old South Quay Turkey Squadron knows this fact, and they like to drop by every morning… early morning, very early, I mean this time even landing in the trees right over my tent when they attacked. I’m seriously thinking about taking the old 20-gauge to bed with me from now on, haha. Actually, what I should do is wait till they are asleep on the other side of the river and get in the boat ’bout 3 a.m. and go cross the river and raid them, see how they like that! Nah, I can’t do that; Moonpie needs all the beauty sleep she can get when we are out there on the two rivers we call the Blackwater and Nottoway.