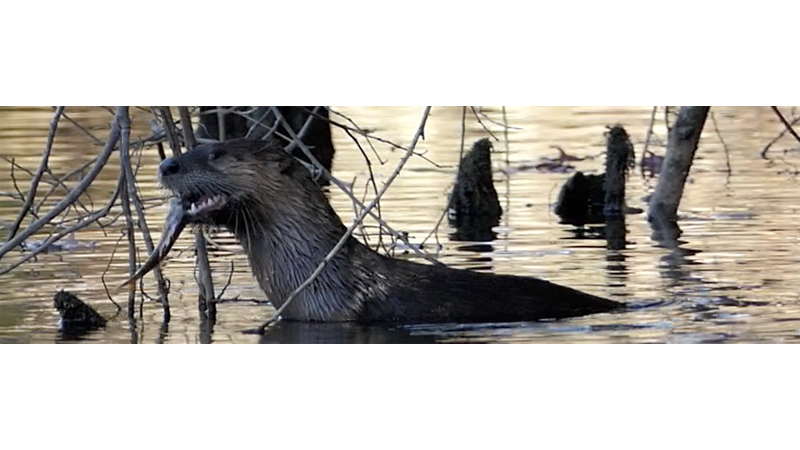 Pictured is an otter with a fish in its mouth that Blackwater Nottoway RiverGuard Jeff Turner spotted on the Nottoway recently. (Submitted by Jeff Turner)

Spirit of Moonpie and I spent November the 9th through the 11th on the Nottoway below Delaware. The water was stagnant and nasty. We seriously need a big rain event. Water temperature was 54, air temps ranged from 42 to 70. It was beautiful weather all three days.

The last trip I was on the Nottoway, I did not see any trash, which was odd. This trip I saw as much trash on this part of the river as I have ever seen, I believe. All of it was old trash, though, which is… good, supposedly.

The fishing on this excursion was good. I ran nine limb lines. The first night I caught eight, the second night five. The cats were a mix of channel and blue. Two of the blues were 20 pounds apiece. Most of the cats were very poor, most likely due to the bad water conditions. One of the 20-pounders should have weighed much more than it did. It was all head. All the cats were caught on fresh cut bait. I caught so many cats I could not get mad when Moonpie started singing the Bob Seger song “Katmandu”… out of tune.

The Moonpie Critter Patrol was good on this trip. We got some good otter footage.

That same otter was working a large stretch of the river near where I was camped. Both mornings early on, I heard it swimming around the boat, looking for a free meal, most likely driven by the fact that the boat reeked of fish from all the blood from cleaning all those catfish. I actually had pink water when I pumped out the boat on day two because there was so much blood in the boat. Isn’t that just a yummy fact?

So, I was glad I filled up my stock of catfish in the freezer. I caught enough between these past two trips to get me through the winter. Now it’s time to work on the squirrels and get ready for the stripers on the two rivers we call the Nottoway and Blackwater.