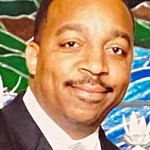 He graduated from North Carolina State with a bachelor of science degree in mechanical engineering and started work for a company in Cleveland, Ohio. Later he moved to Los Angeles, California and worked as an air quality control engineer for South Coast AQMD L.A. He married Pamela Cawthorne and from that union they had one daughter. In total he had two daughters whom he felt were his greatest accomplishments – Ashley King and Simone King.

A service celebrating Al’s life will be held on Monday, Nov. 22, at 1 p.m. in Shiloh Missionary Baptist Church, 30188 Shiloh Road, Boykins, Virginia with the Rev. Alvin Blow delivering the eulogy; the Rev. James Banks Jr. is pastor. The committal and benediction will follow in the church cemetery. Masks are required at all services. Service provided by the professional and caring staff of Wm. M. Johnson & Sons Funeral Home Inc., 224 South Main Street in Franklin. Please share your condolences with the family at wmjohnsonandsons.com.