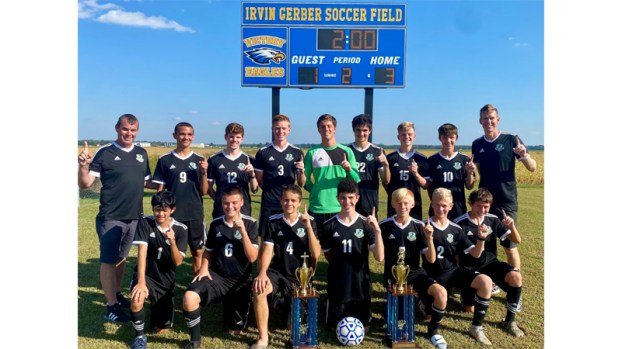 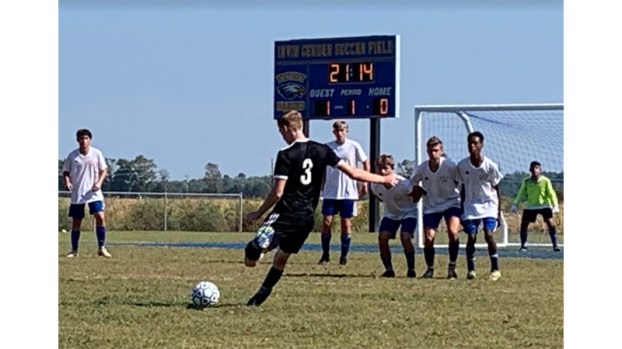 The Rock Lions soccer team went undefeated in the regular season to be crowned 1A North Conference champion, gaining the team access to the coveted NCVCAA Class 1A Championship, a tournament the Rock Lions went on to win in dramatic, upset fashion.

“We were beyond blown away by being able to win the 1A North Conference in our first year and get first in the Class 1A Championship,” Rock Lions Head Coach Danny Dillon said. “The boys have played with class and heart all season, and it has paid off.”

Rock Church received a bye in the quarterfinals and faced off against rivals Suffolk Christian Academy in the semifinals. The Lions had no problem taking out Suffolk Christian, winning by a score of 11-4.

D.J. Dillon, who has been dominating the North Conference, scored a school-record nine goals. Also getting in on the scoring action was Seth Woodward and Adin Brown, who both added a goal.

This win put Rock in the Class 1A final against the Jacksonville Christian Academy Conquerors, who won the 1A South Conference.

The final was played at Victory Christian Academy in Elizabeth City, North Carolina.

Jacksonville came into the championship game as the favorite and was expected to win in a landslide. The Conquerors had dominated any opponent in the 1A, along with a number of public schools in the Jacksonville area. The team had been winning this season by a margin of seven goals per game, and it had won the Class 1A title for at least the past five years. The Conquerors were also the 2019 national champions for independent Christian schools.

The Rock Lions were coming in as the younger and smaller team, but they were certainly determined.

“We heard we didn’t have much of a chance according to everyone we talked to,” Coach Dillon said. “Every scouting report and game film showed them to be dominant in every position, but you still have to play the game.”

And play the game the Rock Lions did.

They packed in their defense and prepared for a long day of keeping the ball out of their box. It was to no one’s surprise that Jacksonville scored first, only six minutes into the game. However, no one expected for that to be its one and only goal.

Both teams battled back and forth. Adam Deaton, Rock’s goalie, put on a stellar performance and had save after save. With 10 minutes left in the half, a penalty kick was awarded to Jacksonville. The shot was off the mark, and the game remained tied.

D.J. Dillon put in another goal with 56 seconds left in the first half to make the score 2-1 in Rock’s favor.

The Conquerors were stunned at halftime. Rock was elated but knew it had to finish strong.

Jacksonville came out aggressively in the second half, determined to tie the game. The Conquerors fired shot after shot, but Rock’s core defense — Caleb Doering, Justin Temple, Luke Blythe and Zack Guertz — deflected so many of them. Deaton, Rock’s only senior, made outstanding saves and came up with a finger-tip save to preserve his team’s one-goal lead.

With one minute left in the game, Rock’s Will Pittman received a pass from Benny Dillon that Seth Woodward chased down and put in the side net to make the score 3-1.

Rock Lions team members knew at this point that the major upset may materialize.

Seconds later, the final whistle blew, and the Rock Lions soccer team found itself as the NCVCAA Class 1A Champions. Celebrations erupted all over the field.

“With God all things are possible,” Coach Dillon said. “We knew we had to play a perfect game, and we did. I’m still unsure how we did it, but it was one of the biggest upsets of my 22-year coaching career. I want to acknowledge the boys for fighting and playing with class. I want to thank my assistant coaches, Perry Turner and William Brown. As a coach you dream of wins like this. As a father you envision your sons coming up big in games like this. I got both today.”

D.J. Dillon was nominated for the MVP Award for Class 1A. D.J., Woodward, Doering and Deaton were all nominated as First-Team North Conference honorees and won awards for the All-State Tournament Team.

Every year Class 1A gives out the Christian Character trophy. The Rock Lions were announced as the winners of this award. This was the first time in 15 years that the 1A champion also won the character honor.
“All the awards that the boys won were well-deserved and icing on the cake,” Coach Dillon said. “However, getting that Christian Character Award was better than winning the whole championship. This is why we have a Christ-centered school, so we can raise up the next generation of young men and women of class, character and integrity. All I can say is, ‘To God be the glory for this unspeakable gift.’”