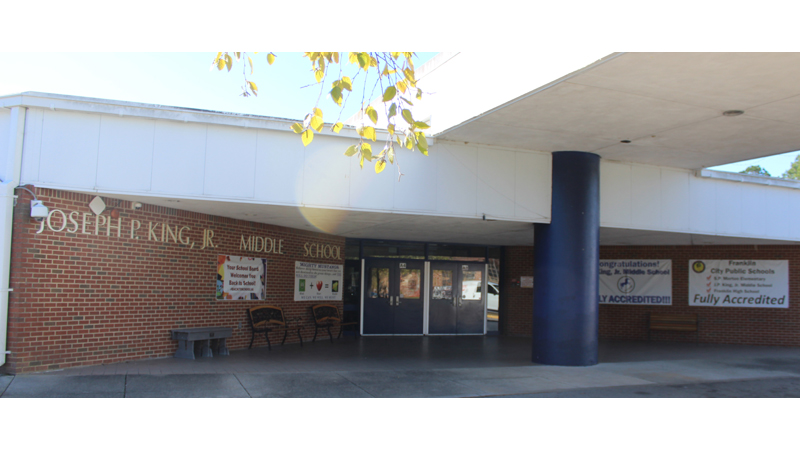 Joseph P. King Jr. Middle School was named by U.S. News & World Report as one of the best middle schools in Virginia based on the 2018-19 and 2019-20 school years. (Photo submitted by Stephen H. Cowles)

Sterling noted that a lot of hard work went into the school earning this distinction.

A FCPS press release stated that according to information supplied by U.S. News & World Report, when the agency recently did its first-ever ranking of public middle schools, it was determined that JPK placed among the top 30% in the commonwealth, earning it the designation of a “U.S. News Best Middle School.”

These logos are offered so that eligible schools can celebrate and promote their high rankings, the FCPS release stated.

The release added that in U.S. News’ explanation for why it ranked schools the way it did, it said, “… schools were assessed on their shares of students who were proficient or above proficient in their mathematics and reading/language arts state assessments. Half the formula was the results themselves; the other half was the results in the context of socioeconomic demographics. In other words, the top-ranked schools are all high achieving and have succeeded at educating all their students.”

Sterling told the school board that there will be a banner ceremony at the next board meeting to help share the good news of the U.S. News Best Middle School designation.

“And we will also be sending to our former principal, Mr. Darren Parker, a congratulations letter as well, because we want to make certain we acknowledge everyone that had a hand in moving this division forward,” she said. “We already know that we are and have always been a symbol of excellence, and I want us to continue to spread the good news about what’s happening in Franklin City. Today is our day, and congratulations to each and every one of you. I just couldn’t contain myself.”

Alluding to an earlier part of the school board meeting when WHRO presented its annual impact statement for 2020-21, Sterling shared another detail that may have contributed to JPK’s prestigious recognition.

“When I talked about WHRO, we use a lot of their video from Algebra 1 and Geometry in the middle school, and they would do it all the time, and I really believe that that helped contribute to our ranking in U.S. News and World Report,” she said.

The FCPS release noted that to learn more about how U.S. News calculated its rankings, visit www.usnews.com/education/k12/articles/how-us-news-calculated-the-rankings.