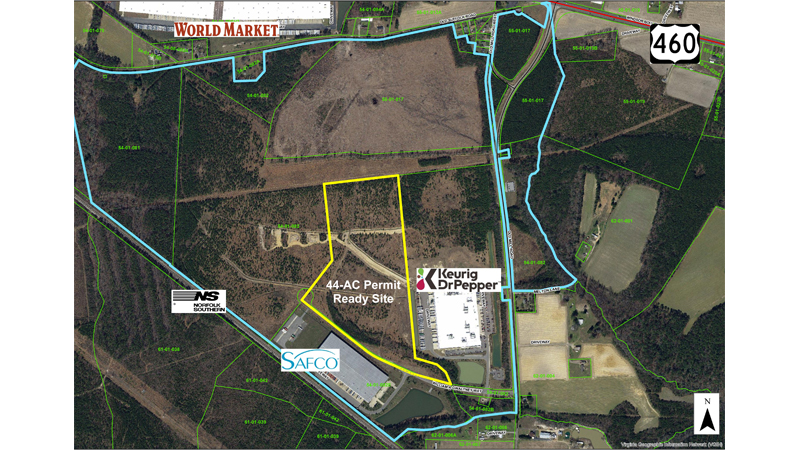 This graphic from the Isle of Wight County Economic Development Department features an aerial photo of Shirley T. Holland Intermodal Park and accompanying graphics that indicate where a 44-acre near-permit-ready site is and what is located near it. (Graphic submitted by Chris Morello)

In reference to the property, Morello said, “A number of things that we’ve been doing in the near past that are completed have included getting (American Land Title Association) surveys, boundary surveys, topographic work, geotechnical work done, threatened and endangered species and cultural resources understood. And we actually went for and received a GO Virginia grant that will be helpful with that, which we matched with already done studies.”

He said the county managed to get this grant through the Hampton Roads Planning District Commission.

“That grant program was for us,” he said. “It was also for Virginia Beach and Newport News to do some bringing properties up to a higher level of developability. That’s the goal.”

Morello said he and his department have been marketing what they think is the absolute maximum buildability on the 44-acre site.

“We know from having our consultants do a land planning study that we can get a building up to 451,000 square feet if it’s a single-loaded warehouse-type facility, for example,” he said.

Earlier, he had noted that “prospective businesses who are looking at us in competition with other localities, they’re looking for certain sizes, and we’re one of the few that has fairly large-size acreage.”

Morello made it clear the county would be open to alternate ideas on how to use the property but that it had honed in on something it thought was ideal.

“Naturally, if it’s the case that we have a prospect that wants to subdivide, we’ll think about that carefully, but we’ve done a lot of planning having to do with a single, large user of this property,” he said. “It doesn’t mean that we wouldn’t consider something else, but this would be optimal, from our perspective.”

Morello played for the Town Council a marketing video for the site, which included some of the points that were noted on a marketing flyer.

Following are bullet points highlighting the site’s readiness that are similar to those on the flyer:

With regard to the wetlands, Morello said, “What we’re doing now is we are starting the permitting process to be able to impact those. We can do that prior to a developer coming along and saying, ‘Yes, we’d like to buy this property, and here’s what we want to do.’ That’s part of the permit readiness.”

Morello also underscored that the 44-acre property is publicly owned, which he said is “often very attractive to industry, prospective businesses and to be able to show that we have taken many steps to get the site closer to being ready to develop.”

Following are bullet points similar to those on the marketing flyer highlighting the advantages to the 44-acre site’s location:

A marketing video for the site also noted that rail access is available to the Norfolk Southern Heartland Corridor.

Speaking of the site in general, Morello said, “What we think we have is a good product in this market area that doesn’t really require all that upfront capital expenditure.”

The county economic development department will continue the permitting process for the site in the months to come.