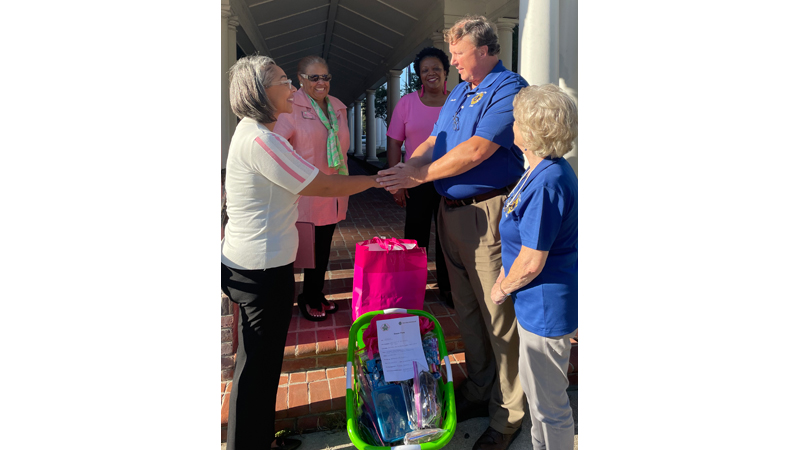 Despite the changes in our lives the past year due to the pandemic and the need for PPE supplies, masks and vaccines, Lambda Psi Omega chapter of Alpha Kappa Alpha Sorority, Incorporated, continued to be intentional about supporting the other basic needs of its global family — eyeglasses and shoes.

The sorority has a Global Impact initiative to provide assistance to the underserved in international areas populated with people of color and engages in global partnerships with organizations to further that goal. Two of the sorority’s global partners are Lions Club international and Soles 4 Souls. Therefore, Lambda Psi Omega recently donated 235 eyeglasses to the Boykins Lions Club International to assist in its eyeglass initiative designed to prevent blindness, help restore eyesight, and improve eye health and eye care for millions of people around the world. President Rick Francis and Treasurer Linda Beatty received the donation on behalf of the club.

The chapter has already begun its next collection effort to donate gently-worn shoes to Soles 4 Souls, an organization whose mission is to create sustainable jobs and provide relief through the distribution of shoes around the world. Our goal is to donate 500 shoes and community support is needed to meet and exceed this goal. If anyone has any gently-used men’s, women’s or children’s shoes of all types, call 757-620-7155 to arrange drop-off by Saturday, Nov. 6.

Alpha Kappa Alpha Sorority, Incorporated is an international service organization that was founded on the campus of Howard University in Washington, D.C., in 1908. It is the oldest Greek-lettered organization established by African American, college-educated women. Alpha Kappa Alpha is composed of more than 300,000 members in 986 graduate and undergraduate chapters in the United States, Liberia, the Bahamas, the U.S. Virgin Islands, Germany, South Korea, Bermuda, Japan, Canada and South Africa. Led by international president Glenda Glover, Alpha Kappa Alpha is often hailed as “America’s premier organization for African American women.”