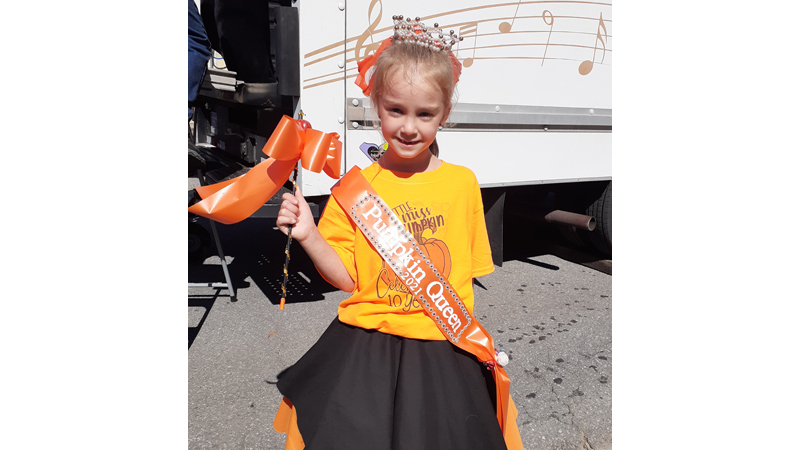 Six-year-old Veronica “Rony” Rose Griffith became the first to receive the title of Lil’ Miss Pumpkin Fest on Oct. 23 at the 2021 Boykins Pumpkin Fest. She was crowned by Councilwoman Linda Beatty. (Photo submitted by Sandy Summers)

The Town of Boykins celebrated the fall season with the 2021 Pumpkin Fest on Oct. 23, drawing what Clerk of Town Council and Event Chairman Victoria Edwards called “a steady flow of traffic and very interactive crowd.”

“Attendance was not as big as it has been in past years, which we expected with COVID-19 causing many to stay away from large gatherings,” she said.

But she and her fellow organizers felt quite positive about the event overall.

“We were very pleased with everything,” she said. “The weather couldn’t have been better, the overall atmosphere was festive and interactive. The entertainment was great, and everyone seemed to have enjoyed the festivities.”

Between 10 a.m. and 5 p.m., festival participants were treated to an opening ceremony, the crowning of Lil’ Miss Pumpkin Fest, a costume parade, the Sounds of Time Show, a 50/50 raffle drawing, closing remarks and a variety of opportunities to play a cake walk.

“Everyone stands on a numbered square and walks around while music is played,” she said. “Once the music stops, everyone stops. A number is drawn, and the person on the numbered square that is called wins a cake. It is one of our most popular events at the festival, as everyone enjoys the homemade cakes.”

Edwards gave credit to the parks and recreation committee members for their help in organizing the Pumpkin Fest, which includes Renee Lassiter, Sandy Coard, Sgt. George Brozzo, Linda Beatty and herself. She also thanked town staff, the mayor and the Boykins Volunteer Fire Department.

Edwards provided a report on the preparations for the festival at the Boykins Town Council’s Oct. 12 meeting, and she said the next town meeting is set for Nov. 9.

“Our next big event is the Circle of Trees in the mini park on Dec. 5 and the Christmas Parade Dec. 12,” she said.