Trick-or-treating on the Nottoway 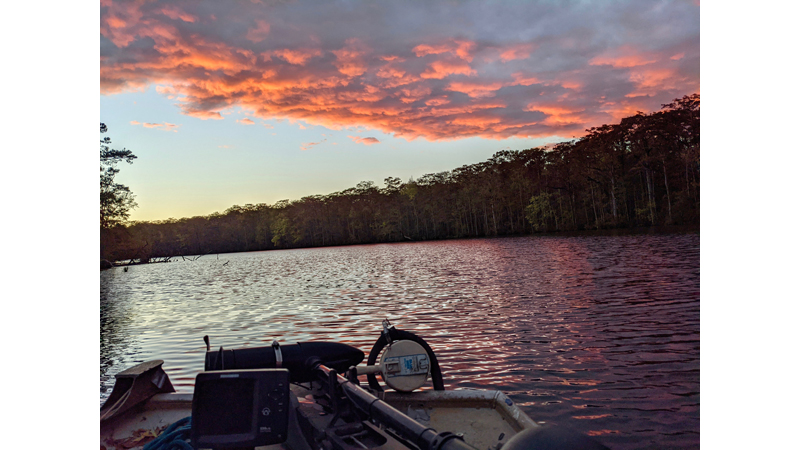 This is a view that Blackwater Nottoway RiverGuard Jeff Turner and company enjoyed on their latest patrol — sunset on the Nottoway on Halloween night. (Photo submitted by Jeff Turner)

Spirit of Moonpie and I spent October the 30th through November the 1st on the Nottoway below Roundgut. The water was amazingly high and clear.

It was one of those odd times where it rained a lot between river gauges. So much so that they did not reflect what condition the river was in, in our area. In other words, there were higher water levels where I was than upriver or downriver… for a short time. Pretty weird.

Anyway, the water temperature was 64 degrees, air temps ranged from 48 to 72. It was truly nearly perfect weather except for the wind. That rain we had before I went helped the river immensely, but it still needs more to flush it out completely. I saw no water quality issues and did not see one piece of trash, which was a real treat! I did remove 80 feet of fishing line from a tree in Roundgut near the mouth, but that was it.

The fishing on this trip was pretty good. I caught six catfish to 15 pounds on limb lines. I did not get to fish much for bass, as I had to fish for catfish bait. That and fixing my campsite took up most of my time out there this trip. I would have caught more cats, I’m sure, but I had two lines the first night get hung up, and one broke or was cut (by something not human), and another the hook was bent, including the tip — on a large #7 hook. I don’t know how that hook got bent either; it was not by human means, ’cause nobody was out there then but me. That bent tip is something no fish in the river could do, so I can’t explain that one or the cut line 10 feet up on that 110-pound test braided line either. I’m guessing the line maybe got rubbed by a fish on a log so much it got cut? The bent tip, well I guess I just missed a bad hook that got bent from last year, and I didn’t notice it before I deployed it… which is hard to believe, but that’s my best guess. Maybe I was tricked… on Halloween.

And speaking of being tricked, never in my life have I ever had rubber boots to fail like this. The entire sole, or tread, came off one of my boots while I was out there. I had to have Whispering Bear bring me a new pair I had stashed away at home. Darn if the same thing didn’t happen to those! Now I know why Bass Pro Shops had them on sale a couple years ago.

So yes, this was my fourth Halloween on the rivers since I began keeping records in 1988. I love being out there on that holiday. It’s so much more exciting out there on Halloween night, for some reason, with the owls a hootin’, and all the cool, creepy noises just seem to be louder. Gets the ol’ blood flowing better! Of course, then there are the really dumb-looking things running around in the swamps… like Moonpie with her new LED pumpkin face mask on. Sadly, I did not get to obtain a picture of her wearing that as she had it on less than five minutes before running headlong into a cypress tree and destroying the mask. Oh well, you had to be there, haha!

It was really fun spending Halloween on the river and getting treated to some fantastic weather and beautiful scenery in early fall. And it was really fun tricking those catfish into my boat on the two rivers we call the Nottoway and Blackwater.