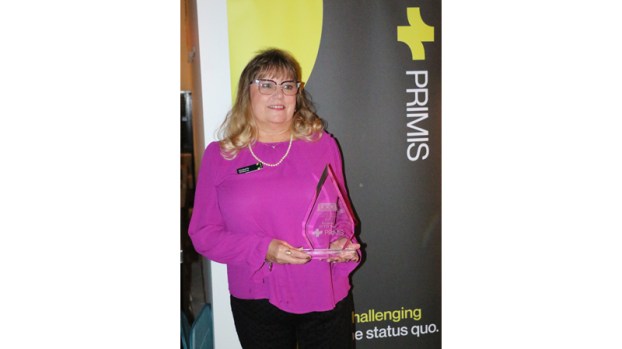 Kim Williams, manager of Primis Bank in Courtland, holds the Franklin-Southampton Area Chamber of Commerce’s 2019 Business of the Year award that was presented to her and her staff Oct. 27 at the chamber’s 67th annual meeting in Franklin. (Photo by Titus Mohler) 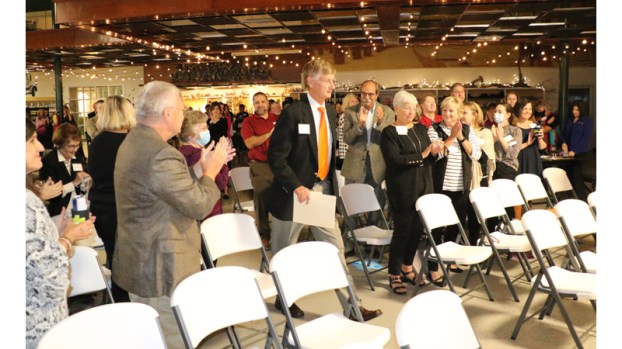 E. Warren Beale Jr. walks up to the podium for his acceptance speech to a standing ovation at The Hubs Vine on Oct. 27 after being introduced as the first-ever Sol W. Rawls Jr. Lifetime Achievement Award recipient. (Photo by Titus Mohler)

The Franklin-Southampton Area Chamber of Commerce relished the opportunity to hold its 67th annual meeting on Oct. 27 after the COVID-19 pandemic interrupted the organization’s usual activities for more than a year and forced it to adapt in a variety of ways.

A large crowd of people gathered at The Hubs Vine for the meeting, during which a review of the chamber’s past two years was offered, the 2019 Business of the Year was recognized and the first-ever Sol W. Rawls Jr. Lifetime Achievement Award was handed out.

Primis Bank in Courtland received the Business of the Year honor, and the lifetime achievement award was bestowed upon E. Warren Beale Jr.

Just prior to the award presentations, Meghan Councill shared a report on how 2019 and 2020 went for the chamber amid her presidency, noting that with the pandemic came an opportunity for the chamber to reinvent itself.

Collin Pulley, with the chamber board of directors, also spoke to how the chamber has been busy despite the restrictions brought about by the pandemic.

Introducing the Business of the Year award recipient, Pulley said, “I have personally been banking with what is now Primis Bank for 40 years, which is approximately the same amount of time that Kim Williams has been involved in banking in the same building.”

He noted that the bank started out as Southampton County Bank.

He said Williams has moved up through the ranks, from teller to supervisor and now the branch manager.

“Through it all, she’s assisted several generations of loyal customers,” he said. “She’s managed continued growth for a rural bank, and her reputation for helping and caring about her customers has brought people to bank in Courtland.

“The Courtland Primis Bank is so much more than a financial institution,” he continued. “When you walk in the door, you can see that Kim and her staff are like family and are an integral part of the community.”

Pulley outlined a variety of ways the bank supports Courtland and Southampton County, partnering with several different organizations to help people in the community.

“Kim is very much a hands-on manager,” he said. “She can run a teller window, work a drive-through, service the ATM and assist other employees … She always goes above and beyond the call of duty.”

He said she spent many hours processing Paycheck Protection Program loans to aid local businesses during the pandemic. He also noted that she has served on the Chamber of Commerce Board of Directors, and she was the chamber president in 2015.

“I’m so honored to be here tonight and grateful to accept the award on behalf of Primis Bank and the Courtland team,” Williams said.

She took a moment to congratulate every business represented at the annual meeting for making it through the worst parts of the pandemic.

“Despite all the technology advancements, at the heart of banking there’s always people,” she said. “I’ve had the pleasure to work with the finest.”

She highlighted how Primis comes from the Latin word for “first.”

“While banking changes, the Courtland team is still committed to serving our community and putting our customers first,” she said. “Thank you to the chamber for being a heartbeat of local businesses in our community… I will continue to live by the Primis mission to be the best we can be for each one of you.”

Councill gave insight into what the Sol W. Rawls Jr. Lifetime Achievement Award represents, simultaneously speaking to the quality of Rawls and Beale as people.

“This award is in appreciation of visionary leadership, extraordinary contributions and dedicated service to the Franklin-Southampton community,” she said.

She introduced retired judge Westbrook Parker, who was selected to introduce Beale.

To set up his comments on Beale, Parker talked briefly about Rawls, noting that his legacy is much deeper than the leadership he provided.

Parker first addressed some of the things that he said many people probably know about Beale in terms of what he has done for the community.

Parker then injected some levity into his introduction by giving some personal insights into the man that is his brother-in-law.

He alluded to Beale’s status as a proud Virginia Tech Hokie, and he also said that beneath the surface, Beale has the soul of a daredevil, offering some examples of this manifesting itself.

In conclusion, Parker said there is no one more compassionate than Beale.

“There is no one more dedicated to making the lives around him better,” he said. “There is no more genuine Hokie, except maybe his son, Michael. And despite all (Warren) has done and is doing for all of us, no one is more humble.”

“I suspect he’s a little embarrassed by all this tonight, and if you ask him why he does all these things, he’d simply say, ‘That’s why the good Lord put me on this earth,’” Parker said. “I’m proud to call Warren Beale my brother-in-law, and I’m honored to present to you the recipient of the very first Sol W. Rawls (Jr.) Lifetime Achievement Award — E. Warren Beale Jr.”

Beale approached the stage to a standing ovation.

“This is a humbling experience because… lots of reasons,” he said. “I’m honored to receive this award. I humbly accept it on behalf of so many people who I’ve had the privilege of working with over the years. Everything is a team effort, and nothing gets accomplished without many joining together to reach a goal.”

He said the award is quite special to him because it is named after Rawls.

“I’m not fond of any long speeches, but I want to say a few words about a man who never wanted any recognition for his many accomplishments to the Franklin-Southampton community,” Beale said of Rawls. “I’m just going to mention some of the ones that I witnessed.”

A sample of just the first few accomplishments that Beale mentioned included references to the hospital and a retirement facility in the city of Franklin.

“I really first got to know Sol in the early ’80s when I was appointed to the executive board of the Southampton Memorial Hospital,” Beale said. “He had spearheaded the efforts to build the hospital in the early ’60s, remained chairman for many years, and before retiring from the board, he was very involved in planning and building The Village at Woods Edge, which is one of the best retirement facilities you can find.”

Beale said Rawls truly served his community until the end.

“We miss Sol Rawls, his leadership, friendship and his deep concern to better Franklin and Southampton,” he said.

“To conclude, I feel very fortunate to live here for many reasons but most important, people, like the people in this room that make this such a special place,” he added.

He offered his thanks to the chamber and all those in attendance for the honor.

“I appreciate being a part of this community and count it as a blessing to be able to serve it,” he said.

The chamber then gave Beale a gift.

“The chamber’s going to donate a bench to the James L. Camp Jr. YMCA in your honor with a plaque recognizing the Sol W. Rawls Jr. Lifetime Achievement Award,” Pulley said.

The chamber also surprised Beale with a video message from Miss America 2020 Camille Schrier, who is a fellow Hokie.