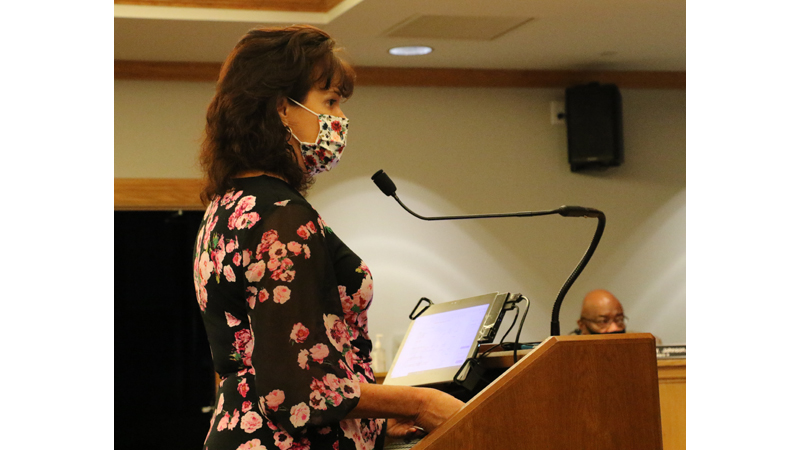 Franklin Director of Finance Tracy Spence recently presented to the City Council a positive financial report for fiscal year 2021, which revealed the city has $3.2 million excess revenue over expenses.

Leading up to her summary of the positive variances for FY21, Spence touched on the subjects of general property taxes and local tax revenue.

It was the FY 2020-21 budget-to-actual comparison for local tax revenue that compelled Mayor Frank M. Rabil to briefly interrupt and express gratitude to the city’s citizens.

“So collectively at the end of the fiscal year, all our local revenue tax sources came in above the budget by $871,443,” she concluded.

“Before you go on,” Rabil said, “that is a tremendous ‘thank you’ to our citizens and people who have been supporting local businesses. Without that, it’s a totally different story.”

City Manager Amanda C. Jarratt, who introduced Spence and the positive financial report, provided some context on the budget, noting how it was formed near the start of the pandemic.

“When we were developing the budget, we just slashed the revenue projections because we didn’t know what to expect at all,” she said, adding that she and her staff would rather operate the city conservatively than have to come to the council with news about lack of funds.

Then Spence gave council members a more expanded look at what generated the positive variances for FY21.

The next item she touched on involved savings that came from having vacant city positions.

“And next, as we’re going to go later on here in the council meeting, we’re going to come to the city to ask for $861,000 of carryover to go into the next year,” she continued.

Her summary noted this $861,000 represented savings due to supply chain issues.

Spence’s summary also stated there were $349,000 in savings due to an emergency medical services billing contract.

At the meeting, she explained that about two fiscal years ago, the council had made the conscious decision to fund EMS capital needs, and the $349,000 was requested to be restricted for that use.

Lastly in her summary, Spence said, “We had funded back in our last fiscal year $986,000 we thought we were going to need to balance this budget that we didn’t.

“So that brings us down to about $3 million that we’re actually going to show in the audit this year, $3.2 million excess revenue over expenses, which is phenomenal for a city this size … in a pandemic,” she said, adding that it goes to show what the city departments have done to bring down expenditures, what the city manager has done in working with the departments, and like Rabil said, what the citizens have done to help grow the city’s economy.

To view the full financial report, visit www.franklinva.com/government/city-council-agendas, find the Sept. 27 agenda, click on it and scroll to page 15.