Concerns raised about activities around library 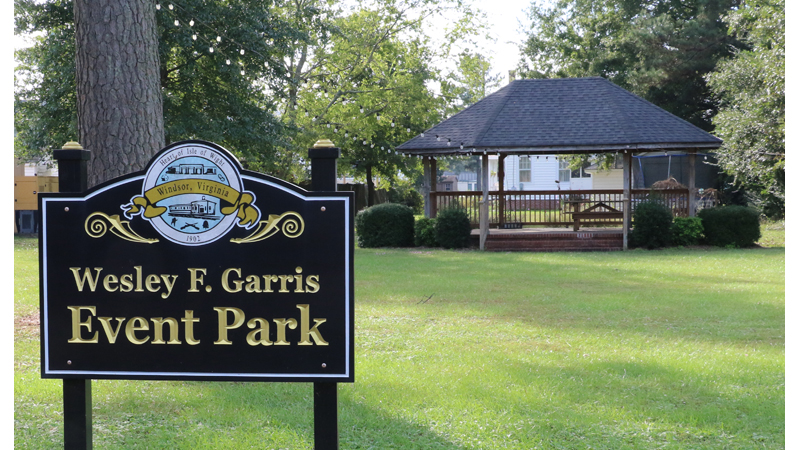 A member of the public stated at the Oct. 12 Windsor Town Council meeting that the gazebo on Duke Street was becoming associated with drug activity and vandalism due to young people who regularly loiter there. The citizen was asking for deterrents to be put in place. (Photo by Titus Mohler)

A member of the public raised concerns during the Windsor Town Council’s Oct. 12 meeting about kids gathering and allegedly participating in drug activity and vandalism at the town gazebo and park pavilion on either side of the library on Duke Street.

Windsor Police Chief Rodney “Dan” Riddle shared what is being done to curb these activities, and following a discussion with the chief, council members and members of the public, Windsor Mayor Glyn T. Willis asked for a presentation at the council’s November meeting on further measures that can be taken to stop potentially illegal activity at the site specified.

During the public comment portion of the Town Council meeting, Phillip Barnes briefly shared his concerns.

“You and I both have a common goal, which is for Windsor to become a great community, and to do this, we need to concentrate on our future, and that’ll be our kids, because hopefully they’ll grow up and take over leadership of the community,” he said to council members. “To do this, the kids need to be raised in the best way possible, and unfortunately, that’s not being done right now.

“We have a breeding ground of bad behavior over at the town gazebo and the park pavilion over there,” he continued. “The kids are gathering. Now, it’s not only kids from Windsor. It’s kids from all around the area. All the neighboring towns gather there, and they loiter, and they get bored, and they do vandalism.”

“They vandalize the area, and they do drugs, and unfortunately, I know this firsthand because my son used to hang out there,” he said.

He noted that the gazebo next to the library has created its own reputation in the community.

“When this was discussed with law enforcement, we were told by them that they have done everything they can do, and to do more they need the proper signage on those sites, such as, ‘No loitering.’”

He said law enforcement specifically asked for a “Closed after dark” sign.

“What we’re asking for the Town Council and mayor to do is put the proper signage there so law enforcement can do what is needed to get this ugly mark off our community and stop it from becoming overwhelming to the point where everyone associates Windsor with the distribution center for drugs.”

Later in the meeting, Vice Mayor Greg Willis asked Riddle to share details on what Barnes spoke about with regard to the town gazebo and park pavilion.

“There’s been some vandalism over there,” Riddle said. “The kids are hanging out. Unfortunately, most of the stuff they’re doing is status offenses, misdemeanor criminal offenses, and the juvenile justice system just puts them into the referral system for lack of parenting.

“We’ve been working with the school to try to keep them out of there, but it’s an ongoing process,” he continued. “We did charge six kids with some vandalism several weeks back, but it’s an uphill battle.”

He said the other part of the issue is that the town does not own the park on the other side of the library.

“I believe the vast amount of the traffic there is because of the free Wi-Fi coming from the library, but again, nothing I can do to suppress that, to stop that gathering point there,” he said. “We have internet access issues in rural communities, that’s a known problem that’s being addressed, so I think that’s something that’s going to have to be kicked back to the county.”

Riddle was asked about the signage that Barnes mentioned, and he had a different response to it than what Barnes had heard from someone else.

“You can put signage up,” Riddle said. “Whether or not it’s enforceable, I think the town would have to adopt a municipal code for loitering. (Town Attorney) Fred (Taylor) may be able to chime in a little more on that.

“But again, you’re talking about juvenile offenses and juvenile offenders,” he continued. “Nobody is physically going to be taken into custody. They’re just going to be cited and released to their parents. It’s going to be referred back to the juvenile court, and even in some of these vandalism cases where we’ve charged people who have committed vandalism acts in excess of $5,000, which are felonies, they’re getting referred to the diversion program for probation, counseling and then it goes away. So, unfortunately, it’s a situation where there are basically no consequences for the actions.”

The vice mayor asked if police can discourage activities in some way, and Riddle offered the reminder that marijuana is decriminalized in Virginia. When questioned, the chief said he was aware this decriminalization does not apply to those under the age of 18, but he said he and his officers cannot just randomly search people based on the odor or based on signage.

He noted his department talks with the kids and does a regular patrol check in the area.

The mayor concluded the discussion by asking Town Manager William Saunders, Riddle and Taylor to determine what the town’s options are — including if cameras could make a difference — for reasonable deterrence.