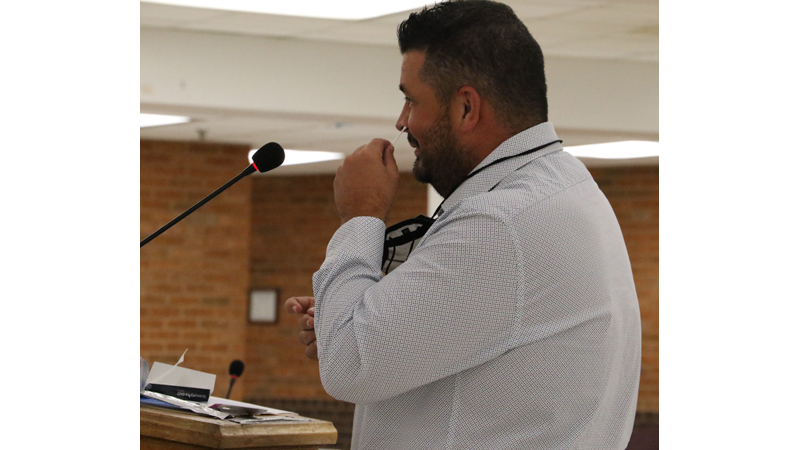 SCPS Coordinator of Auxiliary Services and Transportation Will Melbye demonstrates a quick COVID-19 test that the Southampton County School Board later approved for voluntary use with symptomatic students and staff. (Photo by Titus Mohler)

The Southampton County School Board voted unanimously Oct. 11 to approve two voluntary COVID-19 testing programs to help identify students and staff who are asymptomatic, stopping an outbreak before it happens, and to determine whether symptomatic individuals have the coronavirus or not.

Prior to the vote, the board took in a presentation from Southampton County Public Schools Coordinator of Auxiliary Services and Transportation Will Melbye, who was introduced by SCPS Superintendent Dr. Gwendolyn P. Shannon.

“We have been in communication with the Virginia Department of Health as well as the state Department of Education, and they talked to us about several testing programs,” Shannon said. “So tonight we’re going to make a short presentation, show you all how it’s going to work and then ask you all for approval to move forward.”

“This is a free testing service provided to us through the Department of Health and the Department of Ed,” he said. “The goal of ViSSTA is to reduce the risk of COVID transmission in schools through early identification of cases and prompt public health action.”

He noted the Southampton County school system has teamed up with a vendor, Aegis Testing, which is out of Nashville, Tennessee.

This testing is approved for ages 4 and older in Southampton County’s public schools, Melbye stated, adding that the manner of testing will be a bit less invasive than what people have become used to.

He gave an example of how the testing pattern would work in school, focusing on a given class or team.

“We’re going to take everybody’s sample, and we’re going to put it in one pool, so that way we only run one test,” he said. “If that test comes back positive, then we go back and test each individual to find out where that positive test came from. Their results will return to us within 24 hours. Parents will get notified the same time as us.

“Now how does that happen?” he continued. “Well, it goes through their website. They have an online suite that handles everything from the parents registering their child to giving consent and also getting them results.”

Melbye said parents have to give consent only one time, and then the testing process can proceed.

He gave another example of how things could be done while highlighting a potential scenario that could emerge.

But then he brought up the possible example of a child not wanting to have the test administered to him on a given day.

“Mom can go online, boom, he’s out, he’s not going to get tested anymore, and that’s OK,” Melbye said.

He added that if the student becomes comfortable again later on, the mother can go back and give permission once again.

“This testing is not intended for symptomatic individuals,” Melbye said. “This is to get ahead of any threat that may occur within the classroom.

He demonstrated the test associated with this program for the school board during his presentation.

“This is a test that we know will eliminate any obstacle between a student and a test,” he said. “So, it’s a kit that is provided to us free of charge.”

He opened the kit and noted that online registration is involved, and there is a QR code with which an individual can register the test. He said a number can be called and there will be a person on the other end of the phone that will walk anyone through the whole process.

“If we want to, we can give the consent forms to the parents and they send them back, and we can conduct this right at school, if they give us permission,” Melbye said. “Or we send it home. This is for the test that’s not required. We’re not requiring a kid to take a test.”

He then performed the nasal sweep, noting to spin the swab three times and then seal it up in a small container.

“And then it starts a 15-minute timer, and the person on the phone with you stays on with you through that 15 minutes, and it is a straight antibody test, and you’ll be able to see on the test if there’s actually a positive result,” he said. “And because it was linked with the QR code, it’ll also give you a result through the app, and it will give you the ability to print out a certificate if you were positive or if you were negative.”

He said these tests can be used in a variety of situations. When students or staff are symptomatic at school but it may not be due to COVID-19 and they want to know, the test can be administered.

It can also be administered to potentially avoid placing a lot of staff or students in quarantine or to shorten the amount of time that students are out of school.

In the event of a diagnosis of allergy or sinus infection following this quick test, it will help put the individual on track for treating the ailment and getting back to health sooner.

“With both of these testing programs, we would like to proceed and implement both of them,” Melbye told board members Oct. 11. “As soon as you say ‘yes,’ we are good to go, and we will have a continuous supply of the tests from the state departments.”

He said the ViSSTA program has a four-week rollout.