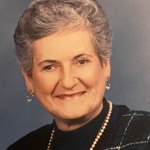 of Robert Harvey Jones, passed away Oct. 21, 2021 in Southampton Memorial Hospital surrounded by family. Born and raised in Branchville, she was the daughter of the late Cleophaus Spence Sr. and Elizabeth Allen Spence. She is also predeceased by her brother, Cleophaus Spence Jr., son-in-law, Randy P. Cobb and nephew, Johnny Spence.

Bessie was a 1952 graduate of Boykins High School and an alumnus of Chowan University. She was a bookkeeper for most of her career and retired from the U.S. Post Office in 2015. Bessie was a member of Branchville United Methodist Church and served as the organist, Sunday school teacher and treasurer until her health declined. She spent the last three years at Courtland Healthcare where she received excellent care.

Services will be private. The family suggests that memorial donations be made to Branchville United Methodist Church or a charity of their choice.