Pontoon camping is over 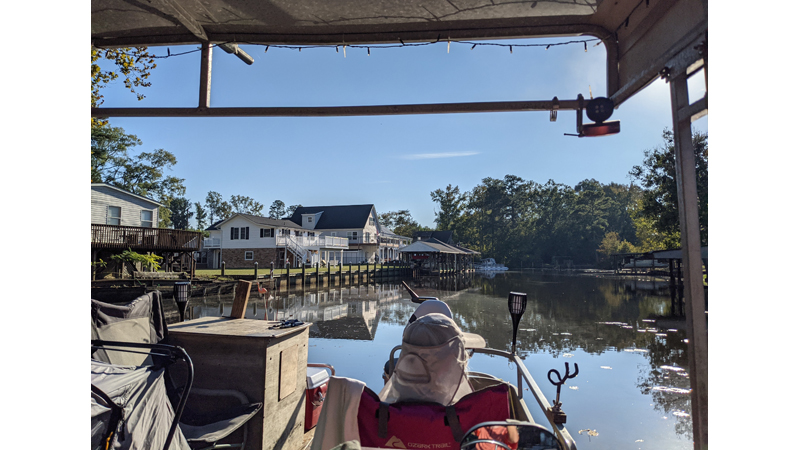 Spirit of Moonpie, Whispering Bear and I spent October the 14th through the 16th on the Nottoway below Delaware. Again, the water was stagnant and nasty. I wanted to go to the Blackwater this trip, but that was in worse shape. Air temps ranged from 59 to 85 degrees, and it was fantastic weather out there.

Trash was very light, but we removed a half dozen or so wads of fishing line/lures etc. from the trees. Got a couple of nice lures in the process. Pretty nice to have folks that got so much money they can afford to leave $10 lures up in the trees! I saw no other water quality issues other than the stagnant water. A couple of friends told me they saw bream up near Hercules gasping for air. That ain’t good and means the dissolved oxygen is getting really bad in the river. We really need a big flush to get things right.

The fishing on this trip was poor. We caught only one small cat the first night and were skunked the second night. Regular fishing wasn’t too great either. I actually had a difficult time catching a jack for catfish bait. Bream were doing OK, and bass were just pretty lethargic. I caught several really small ones on small lures. We didn’t really see all that much wildlife either on this run. It’s like everything was just waiting for rain. Oh, we did see right many ducks, though. I’m guessing that is because the swamps are dried up.

Well it’s that time of year again. Time to switch gears and put the pontoon boat away for the year and get on the ol’ Waterstrider. No snakes, no skeeters, no sweat, less temper tantrums — it’s my time of the year. It will be interesting to see if I can make it another winter season out there. It’s getting harder and harder each year to do the cold weather patrols. But I do love it out there in the late fall; sitting beside a fire at night is just my thing. So much so that I’m willing to continue to take my chances out there on the two rivers we call the Nottoway and Blackwater.