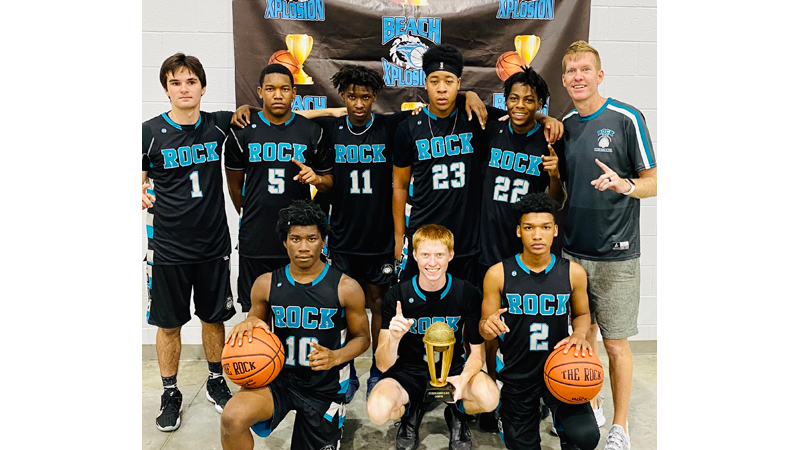 At the beginning of the summer, Coach Danny Dillon assembled a team of some of the best U17 basketball players in Franklin and Southampton County.

They called themselves Team Rock, and they consist of players from Franklin High School, Rock Church School and Southampton High School.

Team Rock competed in a number of Explosion tournaments in Virginia Beach, and in the last one, this team from Franklin that went to the big city became the U17 Explosion Hoopfest champions.

Officials in a Rock Church School news release continued by noting that Team Rock fought hard all tournament to make it to the championship game against a stacked team from the Eastern Shore known as ESP — Eastern Shore Players. This team consisted of the top players from Broadwater Academy, Northampton High School and Arcadia High School.

Team Rock came out firing on all cylinders and took ESP off guard, going up 20-2 over the Goliaths in the first 10 minutes of the game. Sharp shooting from Kaden Bailey, D.J. Dillon and Derrick Perry got the team to that lead as well as Jordan Myrick and Kamari Scott dominating down low. The 6-foot-7-inch center from ESP had no answer for Scott and Myrick.

The Eastern Shore Players would rally back and come within four points with two minutes left. Dillon went 6-for-6 from the free throw line to seal the championship. Team Rock won by a score of 65-55.

“I’m in awe of these guys,” Coach Dillon said. “They fought hard all summer and kept getting better and better each tournament. There’s no way Team Rock from little ol’ Franklin is supposed to win a championship at these tournaments, but here we are. Our players played with class and sportsmanship, and God honored them for it. … That goes right up there with some of the biggest upsets I’ve ever been a part of!”