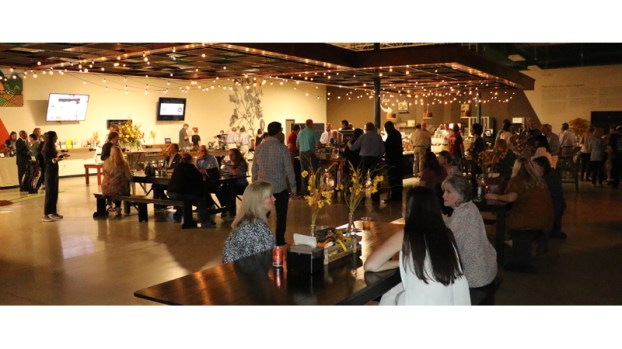 A view from the corner of the room at The Hubs Vine on Saturday, Oct. 2, helps showcase the crowd on hand for the collaborative charity event benefiting the Foodbank of Southeastern Virginia and the Eastern Shore. (Photo by Titus Mohler) 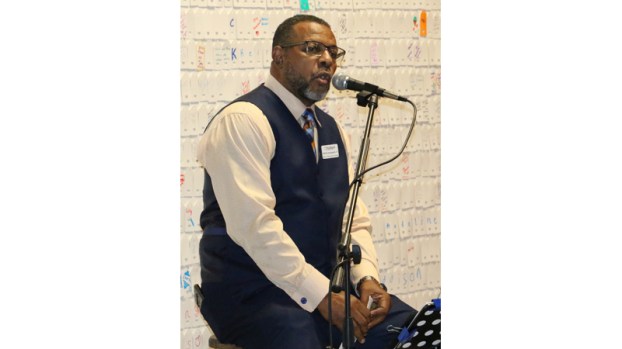 Clifford Hedgspeth Sr., the Western Tidewater Branch manager for the Foodbank of Southeastern Virginia and the Eastern Shore, shares on Saturday, Oct. 2, how The Hubs Vine is helping the Foodbank feed people in the community now, while the community produce hub building is being renovated. (Photo by Titus Mohler) 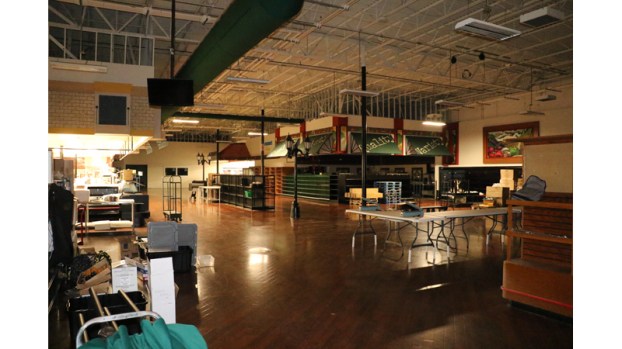 Hubs Peanuts is donating the space on this produce side of The Hubs Vine building at 1459 Armory Drive in Franklin to the Foodbank to help serve as a storage space and as a staging area to pack backpacks and get healthy, nutritious food into the hands of schoolchildren in the community. (Photo by Titus Mohler) 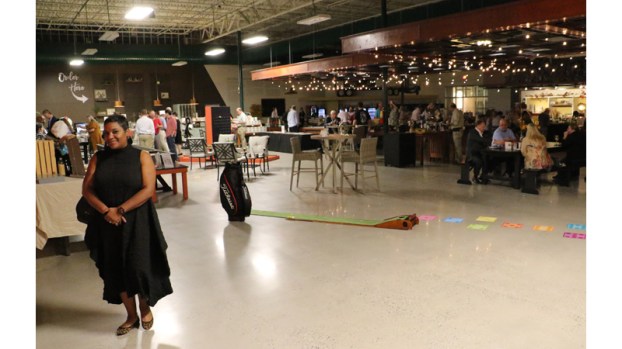 Foodbank President and CEO Dr. Ruth Jones Nichols, far left, and a crowd of community members enjoy the Harvest The Vine collaborative charity event Saturday, Oct. 2, at The Hubs Vine. The event was held to raise awareness and money for the Foodbank. (Photo by Titus Mohler) 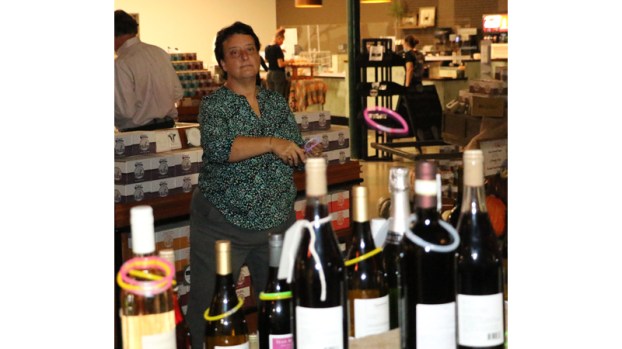 Western Tidewater Regional Outreach Coordinator II Teri Zurfluh sends a ring flying through the air as she participates in a ring toss game during the Harvest The Vine collaborative charity event Saturday, Oct. 2, at The Hubs Vine in Franklin. (Photo by Titus Mohler) 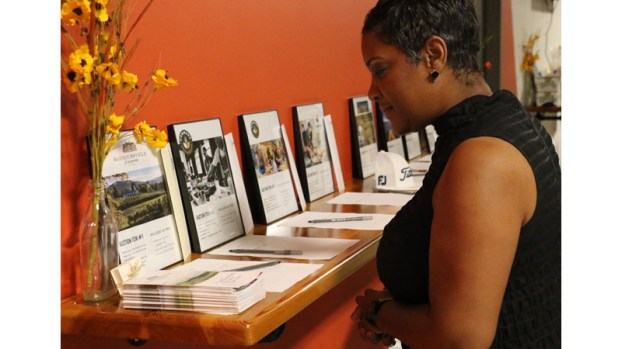 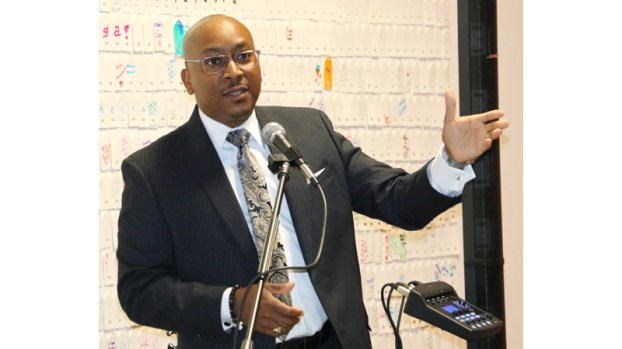 Darius Davenport, a board member for the Foodbank of Southeastern Virginia and the Eastern Shore, offers thanks and encouragement to those in attendance at the Harvest The Vine event Saturday, Oct. 2, in Franklin. (Photo by Titus Mohler)

Harvest The Vine was a well-attended collaborative charity event held Saturday evening, Oct. 2, at The Hubs Vine to benefit the Foodbank of Southeastern Virginia and the Eastern Shore and to also let people know how the Foodbook is feeding people now by “harvesting” The Hubs Vine.

Marshall Rabil, director of sales and marketing for Hubs Peanuts, said Hubs has donated the space on the produce side of The Hubs Vine building at 1459 Armory Drive in Franklin to the Foodbank.

“We’ve donated the space to them to do kit builds and backpack programs,” Rabil said. “So a bunch of different volunteer organizations, The Rotary Club (of Franklin, Virginia), different churches, are going to come here to The Vine and put together packs that are going to go all out into the community.”

The Foodbank is currently in the process of renovating the building at 618 South St. in Franklin that will become the Foodbank’s Western Tidewater Community Produce Hub. It is expected to open in 2022.

But Clifford Hedgspeth Sr., Foodbank’s Western Tidewater Branch manager, said the generosity of Rabil and his team at Hubs has allowed the Foodbank to begin some of the work of the hub now, including providing schoolchildren with meals in their backpacks.

“We will actually deliver the backpacks from Franklin,” Hedgspeth told those attending Saturday’s event. “We don’t have to wait until the building is done. We’re doing it now. We already did our first delivery, and we have another delivery coming next week.”

Hedgspeth noted The Hubs Vine is enabling the Foodbank to reach more people and to create a growing amount of opportunities for volunteers.

“We still have spots available for those groups who would be willing to give us a weekend out of the month or just a four-hour session of packing bags, and we also have volunteer opportunities for volunteer drivers,” he said. “So anyone interested in any of those opportunities, please let me know.”

Foodbank President and CEO Dr. Ruth Jones Nichols was also in attendance at the Harvest The Vine event, and she confirmed that eventually 5,000 meals will be coming out of The Vine as part of its partnership with the Foodbank.

“(Hubs has) been helpful in terms of getting partners on board, which is great because we depend on volunteers to pack the backpack bags and sort the food,” Jones Nichols said. “So it’s good to just be able to raise awareness with different constituents and audiences.”

In collaboration with The Hubs Vine, Saturday’s charity event was supported by Commune, a local farm-to-table restaurant, and The CROP Foundation, a culinary program supporting area restaurants and chefs.

A portion of all proceeds from Harvest The Vine will benefit the Foodbank.

“We’re going to bring a lot of people here to bring awareness to the Foodbank, and so that’s what this night’s about is introducing that to people,” Rabil said during the event.

Darius Davenport, a Foodbank board member, was present at The Vine on Saturday and spoke briefly on behalf of the board, thanking The CROP Foundation for its support, thanking civic leaders for their support since Foodbank became active in the area, thanking Foodbank staff, like Hedgspeth and Teri Zurfluh, and also thanking everyone who attended the event.

“Providing a meal is so important to students as they go to school, important to families,” he said. “What we do impacts every single aspect of the individual life, and so I want you all to embrace what we’re doing, be proud of what you’re doing, support what we’re doing as we go forward, and we thank everyone, Marshall and his family, for all the support they’ve given to the Foodbank. We’re going to keep moving this thing forward.”

During the Harvest the Vine event, the voice and guitar-playing of award-winning singer/songwriter and native Virginian Mike Lille set the tone for the event, as people ate and socialized. TV screens quietly highlighted different aspects of the work that the Foodbank does.

Those attending enjoyed locally made dishes from the talented chefs of Commune and The CROP Foundation students.

Guests were also given the opportunity to participate in a silent auction. Local products and experiences up for bid included a private catered dinner, cooking classes, an Ocean Cove oysters party for 20, concert tickets at a Chisholm vineyard, golf outings and more.