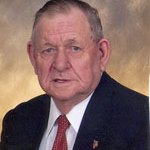 Howard was an Army veteran serving during the Korean Conflict and a retired machine operator in the Sheet Finishing Department of Union Camp Corporation. He was a member of Franklin Baptist Church.

A memorial service will be held at 2 p.m. on Friday, Oct. 8 in Wright Funeral Home with the Rev. Steve Gibson officiating. The family will receive friends one hour prior to the service in the funeral home and suggest that memorial donations be made to Franklin Baptist Church or Habitat for Humanity.