Frogs to know the town by 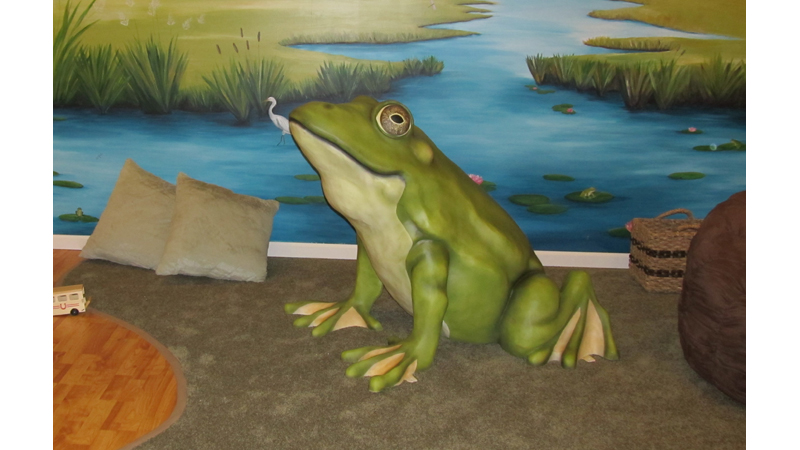 The Windsor Economic Development Authority has purchased three of these frogs that are fabricated in hand lay up fiberglass. Pictured is a painted and installed example of the leaping frog sculpture that will soon be emblematic of the Town of Windsor at key spots within the locality. (Photo submitted by Cowpainters)

The Windsor Economic Development Authority is drawing from town history to create something memorable by which people can recognize the locality. The EDA has ordered three large frog sculptures that will be painted and placed at key points in Windsor by around spring 2022.

Windsor Town Councilman Jake Redd, who sits on the EDA, shared some details on the project with the council during its Sept. 14 meeting, and he also spoke about it in a Sept. 16 interview with The Tidewater News.

In the interview, he said the EDA had been looking for a way to aid the town not just through business retention and recruitment but also by creating “something just to have for people to recognize the town by other than, say, the Dairy Queen.”

“He rode through a town where they’ve got painted bicycles, all sorts of different bicycles throughout the town, and it’s just kind of an odd thing but a neat and cool-looking thing,” Redd said. “So he kind of was pushing (that) we ought to do something like that.”

Then DeWitt Holland or possibly another EDA member offered up the idea of a frog being the emblem for Windsor, Redd said.

“If you look at the town crest, there is a frog on there, and before Windsor was called ‘Windsor,’ — at least this is the way I understand the story to be — when it was first named, or a long time ago, it at least went by the nickname ‘Frog Bottom’ or ‘Frog Town,’” Redd said. “That’s kind of where the frog got put on the crest and has been a part of Windsor for a while.”

The Town of Smithfield has pig sculptures, inspired by that town’s connection to ham, and Redd indicated Smithfield’s project has served as a guide for Windsor.

“DeWitt Holland has been instrumental, pushing this (frog) project forward and reaching out to people and figuring out how Smithfield has handled their pig project and then reaching out to the company that has made the pigs and picking the frog design,” Redd said.

The company making the frogs is called Cowpainters, a Chicago-based enterprise that specializes in the design and fabrication of fiberglass animal forms, particularly for public art projects.

The chosen design for Windsor shows a frog in a sitting position but about to leap. Brieanne Hauger, of Cowpainters, said this design is fabricated in hand lay up fiberglass.

Redd noted that each frog is 42 inches high, 42 inches wide, has 45 inches of depth and weighs about 250 pounds.

“The cost of one frog is $1,171, and right now, the EDA’s ordering three, and of course, there’s shipping costs and some other costs to be associated with getting them in place and that sort of thing,” he said.

Each frog will ultimately need to be set on a concrete pedestal, and “we may do some (pedestals) that look like a lily pad or something like that,” Redd said.

A fun catchphrase will likely be employed to help tie together the themes of the frogs and the town.
“We don’t know what we’re going to do, but we’ll probably have kind of a little, catchy (slogan) — ‘It’s a hoppin’ place,’ or ‘This is a jumpin’ town,’” Redd said.

He credited Holland with helping get some other members of the community involved, like Windsor Christian Church, which has purchased a fourth copy of the selected Cowpainters frog to place on its own property in an effort to help further promote the town.

“There’s also some talk about, in the future basically, maybe some business locations and the town working together and hopefully getting the same exact frog put on the business’ property, and the business has control over it,” Redd said.

The placement of the three frogs purchased by the EDA is undetermined at this point.

“We’re just starting to talk about that, really looking for some ideas,” Redd said. “I’d like to see one probably go at the Windsor Town Center, but that’s school board property where the actual town center is, so everything is up in the air.”

Redd said he thinks Windsor Christian Church’s frog will arrive in December, and his rough estimate for the arrival of the town’s frogs is January.

After arriving, the frogs will need to be painted at an indoor location somewhere, then clear coated and then placed, Redd said. The town will look to make this a springtime project.