Large crowd enjoys trip back to a previous time 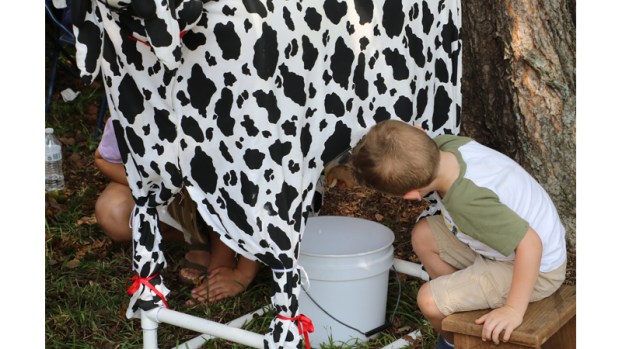 Five-year-old Hank Spring tries his hand at a simulation of milking a cow at Heritage Day. (Photo by Titus Mohler) 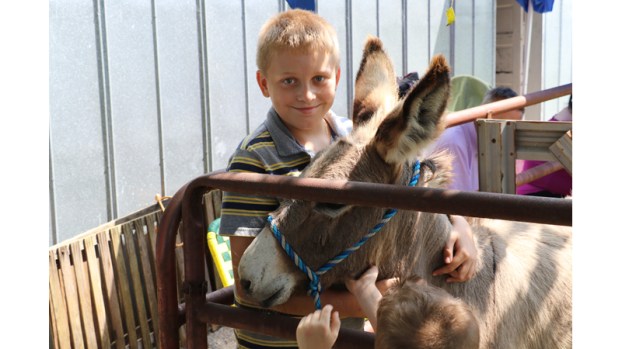 Thirteen-year-old David Cuthbertson smiles for the camera while embracing a donkey that was on hand for Heritage Day in Courtland. (Photo by Titus Mohler) 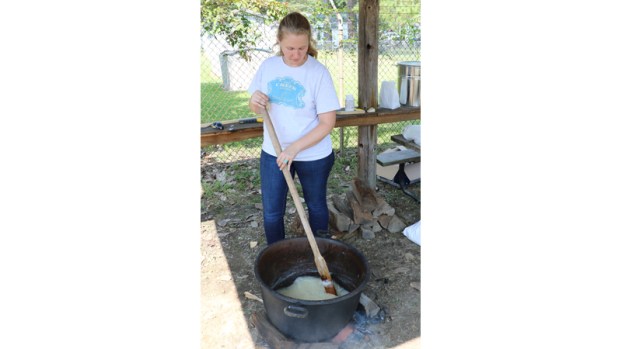 Victoria Edwards is demonstrating how to make lye soap for those passing by at Heritage Day in Courtland. (Photo by Titus Mohler) 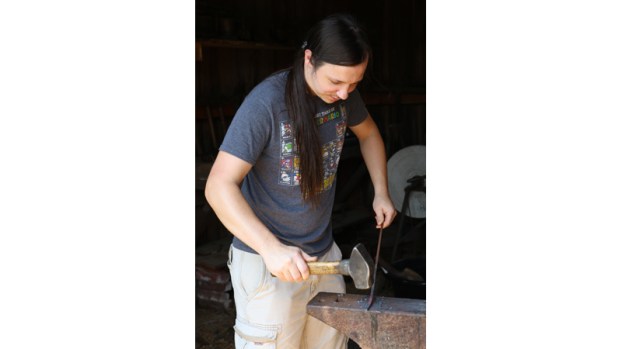 Chayton Patrick, 22, showcases some of his skills as a blacksmith at Heritage Day on Sept. 11 in Courtland. (Photo by Titus Mohler) 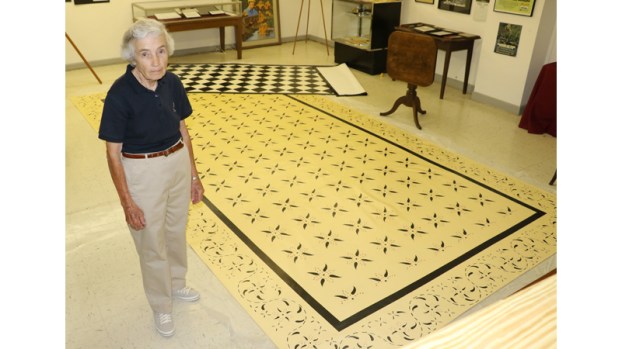 Helen Hill presents the canvas floor coverings she made that will eventually go in the Rebecca Vaughan House. They are currently laid out inside the Museum of Southampton History. The one in the foreground will go in the house’s parlor, and the checkered one will go in its hall. (Photo by Titus Mohler)

Heritage Day made an impressive return Sept. 11, as the 27th edition of the event that offers an interactive experience of a previous time drew a significant crowd to the Southampton Heritage Village and Agriculture & Forestry Museum in Courtland.

Last year, the event was canceled due to the COVID-19 pandemic, but this year, the village was buzzing with life, the sights of tractor-pulled hay rides, soap-making and the sounds of the sawmill, the blacksmith at work and bluegrass music.

Lynda Updike, who helped organize the event sponsored by the historical society, the village and the museum, was working at the petting zoo and was already pleased with the turnout in the early afternoon.

“I’ve never seen so many children in all my life,” she said.

Children interacted with the animals, including a donkey, and some were given a glimpse of baby chicks that were on hand for the day.

Victoria Edwards was giving a demonstration on how to make lye soap, and the activity represented a special heritage for her personally.

“I’ve been doing this for 10 years exactly, and I actually got interested in it by Mr. (Bobby Cobb) making it here,” she said. “So I saw him do it, and then he passed away, and I was honored to keep up the tradition. I still use his recipe.”

Not far from there, 22-year-old Chayton Patrick, of Chesapeake, was demonstrating the skills of a blacksmith.

“I do a lot of the old, primitive skills, so like the flintknapping, the leatherworking, woodworking, crocheting — I’m a generalist,” he said.

As for how he got his start developing all of those skills, he said, “I really just started watching YouTube.”

His personal education began when he was around the age of 13, and he has stuck with it now for nearly a decade.

Quite a few people attending Heritage Day were not local, with some coming from elsewhere in the commonwealth or even from North Carolina.

Todd Shewbridge was there with Barrett and Tatum Shewbridge, and he noted that they were all from Virginia Beach and came specifically for Heritage Day.

“This is like the seventh year in a row,” he said, acknowledging 2020 as an exception. “We love it.”

Elsewhere in the village, John Quarstein was showcasing to visitors the Rebecca Vaughan House, which is where the last five slave owners were killed during Nat Turner’s rebellion.

Quarstein noted he has been working to restore the house for 14 years. He highlighted some of the work that has been done, sharing that the foundation was rebuilt and he has furniture that is going to be added, including, but not limited to, several Vaughan family items, a tea table, two chairs, a sofa and a drop-leaf table.

“We need about roughly $80,000 more dollars to finish this part of the project, and yet we already have paid for an interactive map,” he said. “We’ve restored all this furniture, so our issues are finishing the faux finishing, buying some exhibit cases, finishing these floors.”

He said the restoration project benefited from three grants that came from the Virginia Department of Transportation as part of a federal program, but he indicated that VDOT took away $60,000 during the pandemic.

“The bottom line is that we have to make that money up,” he said. “Otherwise, we could have had this thing open by Christmas or so.

“Now the signs that are going to go through Courtland, the smartphone app, the interactive map are all being completed right now,” he continued. “The website is being worked on right now. It should be up in two or so months. Those are going to be all cosmic things, I’ve got to tell you, because that’s how we’re going to reach out.”

Laying on the floor of the nearby Museum of Southampton History are canvas floor coverings that Helen Hill made for placement in the Rebecca Vaughan House parlor and hall.

“I don’t know how many hours I spent, and I didn’t spend every day, but it took me over a month,” Hill said, referencing the time it took to make the coverings.

She explained that the floor coverings’ material is 12-grade canvas, basically the same that would be used for a sailing ship’s sails.

“This has got about six coats of varnish on it, and that protects it,” she said referring to one of the coverings she made. “And you can wax them, but I was afraid to. I didn’t want anybody to slip and fall.”

She noted that originally, the house was going to be ready for the floor coverings in July, so that is why she purchased the material to paint them and started on them this summer.