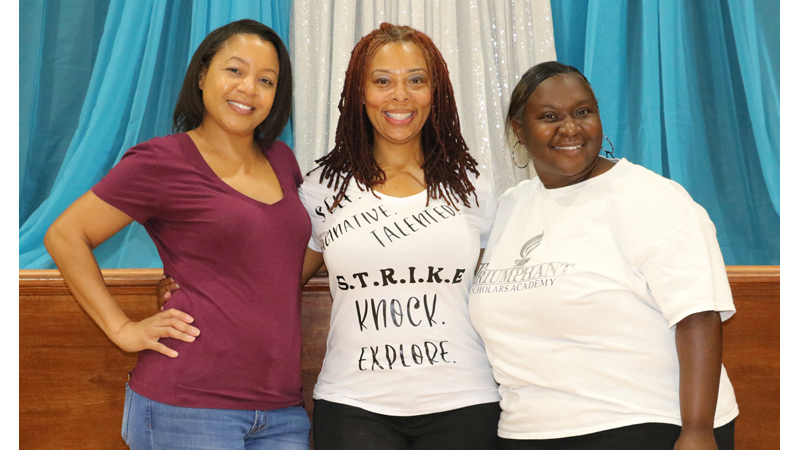 Ariane Williams, center, poses for a photo with Katrina Parham, left, and Monica Vaughan during the S.T.R.I.K.E. youth empowerment event Sept. 18 at the Hayden Village Center. Parham and Vaughan helped Williams organize the proceedings, which drew a solid crowd of Franklin-area youth. (Photo by Titus Mohler)

The youth empowerment event put on by Ariane Williams and her organization, Image Affirmed, on Sept. 18 in Franklin successfully helped promote the talent and imagination of area young people.

Known as S.T.R.I.K.E., Saturday’s free event drew approximately 60 youths to the Hayden Village Center, where Williams had a variety of efforts in motion to help encourage children and explore their potential.

“I think it was extremely positive,” Williams said of S.T.R.I.K.E. “We’ve been asked to replicate this particular moment again in some different areas, so I think that it went well.”

Williams, a Carrollton resident who grew up in Franklin and now teaches in Chesapeake, said the event’s purpose was definitely to inspire and empower the youth, ages 7 and older, through positive interventions.

Those interventions happened on a variety of levels.

The art gallery ended up being a successful money-making endeavor for the young artists behind it.

“The children’s art was sold, so we had a little auction,” Williams said.

She also noted that some of the teenagers in attendance were able to sign up for a mentoring/driving school.

“We were able to give away some haircuts,” she said, along with beauty supplies.

The Franklin High School cheerleaders came out to perform, and parents and community leaders were also on hand.

“We were able to make some connections with some of the community leaders,” Williams said.

She ultimately noted that the event had a good amount of children show up for it.

“We had free food, and we still have food left,” she said near the end of the event, indicating she and organizers were going to find good places to give it away.

Expressing appreciation for her former classmates at Franklin High School, Williams said, “A lot of the people that I went to high school with came out to help me organize.”

William stated that the next place she has been asked to hold a S.T.R.I.K.E. event is in Smithfield.