FRANKLIN – Earl J. “Squirrel” Warren, 79, passed away Sept. 25, 2021 in his home with his family by his side. Born in Isle of Wight County, he was a son of the late Shafter and Ada McClenney Warren and was also predeceased by a sister, Susie Wyatt and a brother, Shirley Warren. 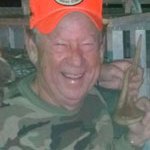 Squirrel was an Army veteran and a retired wood scale inspector for Union Camp Corporation with 37 years of service. He was a former fireman for the City of Franklin, a lifelong member of Black Creek Hunt Club and a member of Franklin Baptist Church.

A funeral service will be held at 2 p.m. on Saturday, Oct. 2 in Wright Funeral Home with Dr. Charles Qualls and the Rev. Steve Gibson officiating. Burial will follow in Poplar Spring Cemetery. The family will receive friends one hour prior to the service in the funeral home and suggests that memorial donations be made to a favorite charity.