Therapy after ‘the mother of all curveballs’ 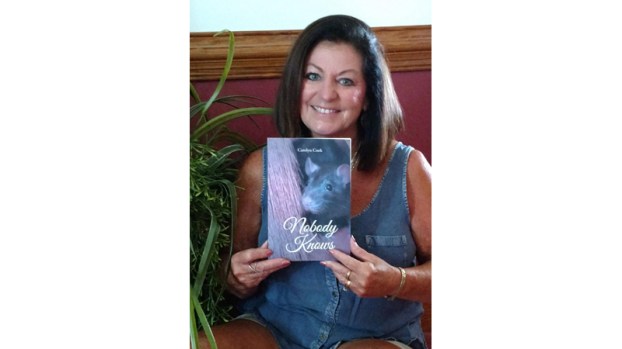 Carolyn Cook, of Black Creek, holds up her first-ever book, “Nobody Knows,” which chronicles her life from 2014-21, telling the story of how she went from semi-retirement back to early parenthood when she and her husband, Troy Cook, gained custody of their 8-month-old and 3-year-old grandsons in 2014. (Photo submitted by Carolyn Cook) 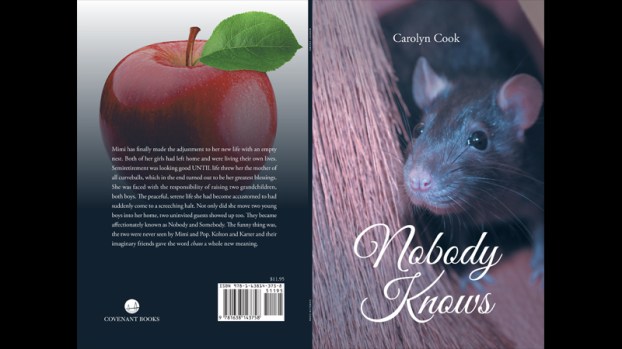 Pictured is the cover to Carolyn Cook’s first book, “Nobody Knows,” which details the surprise journey of second parenthood being experienced by her and her husband, who are known to the two grandchildren they are raising as Mimi and Pop. (Photo submitted by Carolyn Cook)

Many people have found from firsthand experience that life can be highly unpredictable.

Carolyn Cook, of Black Creek, is one of those people, and she decided to write a book about it.

More than seven years ago, she was settling into semi-retirement when, as her book’s Amazon.com synopsis says, “life threw her the mother of all curveballs, which in the end turned out to be her greatest blessings.”

“Seven years ago, my husband and I took custody of two small grandchildren,” she said. “The littlest one, who was the inspiration for my book, was only 8 months old, and the oldest one was only 3 years old.”

Their names are Kolton and Karter, respectively.

Cook said both she and her husband, Troy Cook, lost their jobs at the Franklin paper mill when it closed down in 2010.

“We had just started a landscaping business, so I was working with him,” she said.

Then the situation arose where Kolton and Karter appeared to be headed into the foster system, but Carolyn and Troy had no intention of letting that occur.

“That was not going to happen, so whatever we had to give up for them, that’s what we did,” she said. “I didn’t know what I was biting off, but anyway, we did it, and I’m glad we did, because they are thriving. They are happy, healthy, they are vibrant, they are amazing kids.”

Carolyn and Troy gained custody of Karter and Kolton in 2014. Carolyn backed out of her previous role in the landscaping business to take care of the two babies she suddenly had at home.

“I was at semi-retirement age, and here I am raising two small babies, and if you don’t think that’s a curveball, it was,” she said.

She was navigating the challenge of having to go into a later-in-life “parent mode,” and at the same time, she was tackling the sizable challenges that come with looking after small children, who can oftentimes be quite ornery. Kolton is no exception to this rule.

“He has just been a terror from day one,” Carolyn said. “Just whatever he could find to get into, he did.”

So Carolyn decided to do something interesting in the face of these circumstances.

“I would just make notes, just sit down and make notes,” she said, writing the story of her life with Kolton and Karter.

She said that the notetaking was therapeutic for her, and she has kept it up over the past seven years.

“Everybody kept saying, ‘You just need to write a book,’” she said, and then one day in 2020, she took all of her little notes and began following their advice. “I sat down and just started writing, and as things would come to me, I would just sit down and write.

“And when I felt like I was done with my therapy book, then I stopped,” she said. “It’s not a huge book. It’s an easy read, it’s a quick read, but I’m really getting some good reviews.”

The book, titled “Nobody Knows,” is 50 pages long and was published by Covenant Books on July 29, 2021. It is available in paperback on Amazon.com and also for download onto the Amazon Kindle.

“You know, it’s crazy because I’ve met so many people that are doing the same thing we’re doing,” she said, referring to raising grandchildren.

She said she feels like those who find themselves in such a situation will relate with what she and Troy have gone through.

“If it makes somebody smile, then so be it,” Carolyn said of her story. “Somebody can have a laugh on me, because it’s been a ride, believe me.”

To reset and become a parent of young children again, she said she found strength from God, adding that she prayed a lot.

The entire experience has been worth it, she said, “and one day I hope that they’ll look back at this little book and smile, and I probably will end up sitting down and reading it to them.”

She said Karter and Kolton know they are in the book.

“Hopefully, if the weather permits, it’s going to be on the patio,” she said.

Kolton is now 7 years old and will be 8 in October, while Karter is 11 years old and has started middle school, meaning plenty of adventures still await Carolyn and Troy during their second parenthood. And Carolyn has kept up her therapy.

“I’m working on the sequel,” Carolyn said. “I’ve got two chapters in on my next (book), so if this one does well, I’ll do it again, because it’s been fun.”