FRANKLIN – Ronald Lee Ratcliffe, 82, passed away Sept. 17, 2021 after a brief illness. He was born in Charleston, South Carolina on Oct. 1, 1938 to the late Robert and Beverly Ratcliffe. 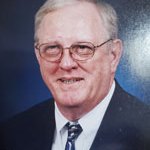 Ron graduated from St. Andrew’s High School, Charleston, South Carolina, attended Clemson College and graduated from Capitol Institute of Technology in Washington, D.C. After serving in the U.S. Army, he began his long career in computer sales. Ron loved his job and made many lasting friendships while at Honeywell and Wang Laboratories.

Woodworking, photography, hunting, target shooting and apple pie were some of Ron’s favorite things, but most of all he cherished his times with family, especially with his grandchildren.

A graveside service will take place on Monday, Sept. 20, at 3 p.m. at Southampton Memorial Park in Franklin. In lieu of flowers, you may wish to send a contribution to High Street United Methodist Church, Courtland or Lions Club of Franklin.