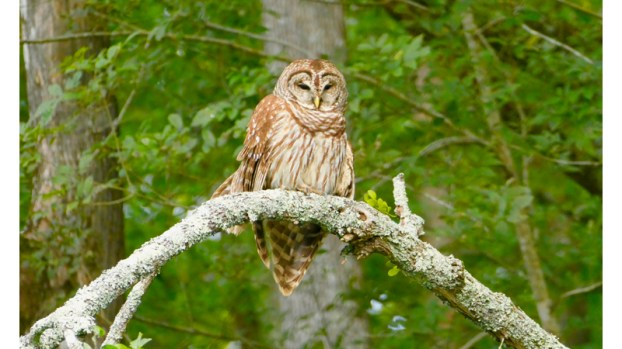 Pictured is a barred owl that Blackwater Nottoway RiverGuard Jeff Turner and his companions spotted on his most recent trip on the Nottoway River. He noted one of its wings appeared to be damaged. (Photo submitted by Jeff Turner) 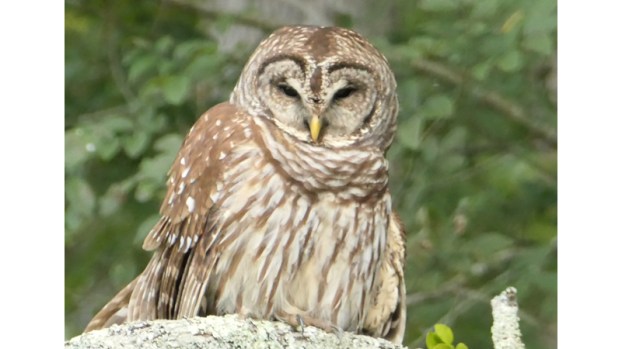 This photo offers a closeup of the barred owl recently seen sitting on a limb right on the edge of the Nottoway River, 20 feet up in a tree. (Photo submitted by Jeff Turner)

Whispering Bear, Spirit of Moonpie and I spent September the 14th through the 16th on the Nottoway below Delaware. The water was normal level but terribly nasty and smelled like dead fish. It was pretty darn stagnant, and we sure could use a good rain upriver. Air temps ranged from 72 to 90 degrees. Skeeters were not too bad this trip, and trash was nonexistent. We picked up only two pieces!

The fishing on this trip was great for bream and catfish, not so great for bass and jack. The few bass and jacks that were caught were caught on a white tail Mepps. We caught five catfish, with the largest big blue weighing 35 pounds, and it was 42 inches long. We got to try out the new cat-lift system I devised for getting these big cats in the boat and weighing them, and it worked pretty well. I had to come up with something, as old feeble folks like us ain’t got a lot of strong-arm capability these days. Cats were all caught on cut bait suspended 6 feet from the surface.

WOW! The Moonpie Critter Patrol was busy this trip. We saw four eagles total. Two adults, a juvy that was almost to bald eagle status and another adult. So that was quite a treat for us all. We also had a pretty strange experience with a barred owl. The first night we pulled up in a creek near Monroe Bridge to spend the night. That night we heard a terrible commotion over in the swamp that sounded like something being killed. It was pretty creepy sounding. Two days later on the return trip back upriver, right there at that same creek we came upon a barred owl sitting on a limb right on the edge of the river, 20 feet up in the tree. The owl was obviously injured as one of its wings was sticking out the back, kind of screwed-up looking. So that gave us a lot of opportunity for pictures. Whispering Bear put together the night of the creepy death sounds and the injured owl. So, I don’t know if two owls were fighting that night or what or maybe just tangled with something it couldn’t handle, but whatever it was the owl did not look like it could fly, and it never did the whole time we were clicking away madly with the cameras.

So, I hope by the next time we are out there, the injured River Spirit will be back to perfect health, because we give a hoot on the two rivers we call the Nottoway and Blackwater.