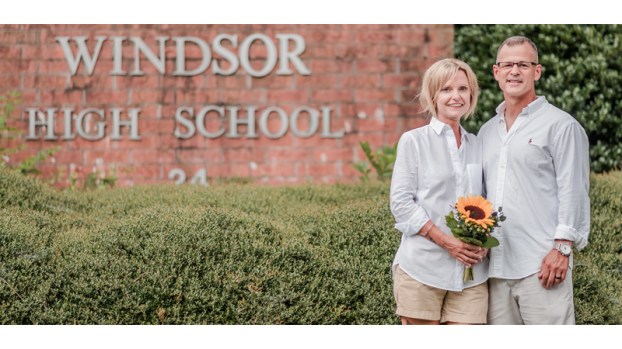 Michelle and John Brown smile for a photo on their wedding day Aug. 14. As high school sweethearts who went their separate ways for a time, they reconnected years later and decided to hold their wedding at the site of their first meeting in 1985 — Windsor High School. (Photo by Brittany Copeland / Brittany Anne Photography) 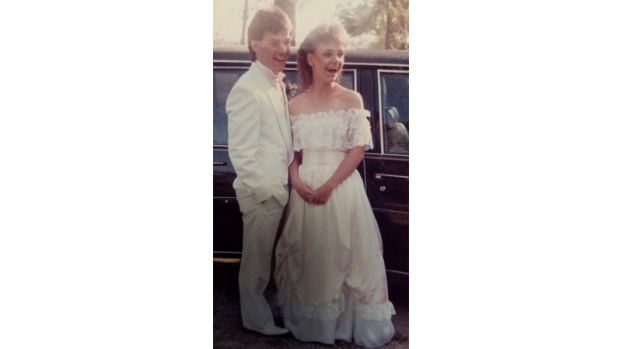 Pictured here in 1986 are John Brown and Michelle Francis when they were Windsor High School students and sweethearts, attending the prom together. Thirty-five years later, after reconnecting in 2017, they were married at the school in an Aug. 14 wedding. (Photo submitted by Michelle Brown) 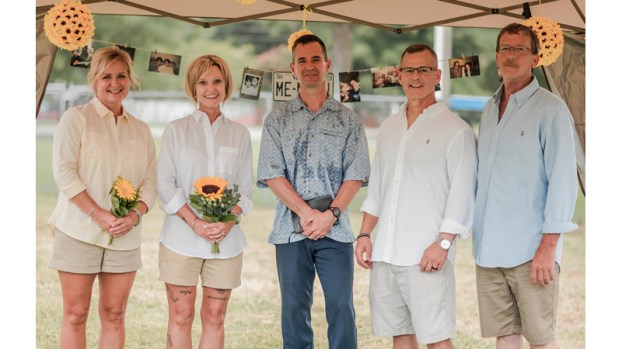 The Brown wedding at Windsor High School on Aug. 14 was simple and to the point, by design. In addition to the photographer, it featured, from left, Jeannie Weaver Blough, the matron of honor; Michelle Brown, the bride; Rich Lee, the chaplain; John Brown, the groom; and Tony Taylor, the best man. (Photo by Brittany Copeland / Brittany Anne Photography)

John and Michelle Brown found marital bliss in a familiar place after rekindling a love first ignited in high school.

“It’s just a fairytale in itself, if you will — 36 years later, finding each other,” Michelle said.

“It’s been quite the story,” John added.

Michelle recalled that back in ’85, John had transferred to Windsor High from Isle of Wight Academy, so he was the new kid on the block.

They had natural chemistry, and it was not long after they met that they got together.

“He asked me, ‘Hey, you want to go out sometime?’” Michelle said, noting this took place sometime when they were at the school’s gymnasium.

She credits John’s best friend from high school, Tony Taylor, for helping get them together.

The relationship informed a significant part of their high school-era experiences, as they went to prom together, worked at Winn-Dixie together in Franklin, and Michelle even got a personalized license plate for her car that highlighted their status as a couple.

“You know how things go when you’re in high school — you always want to be different,” John said. “My name was always J-o-h-n, but I was like, ‘Ah, I want to be different. I’m spelling it J-o-n.’ And so she picked up on that, and she never let that go.”

John was older than Michelle, and after he graduated, he joined the U.S. Air Force. As they became separated geographically, it initiated the part of their lives where their paths went in separate directions.

“You know how things go,” John said. “You have long-distance relationships that don’t work, so she started to date some other folks and things like that.”

He recalled with a laugh that one day during that time, when Michelle was at work, Taylor went and took the personalized license plate off her car and mailed it to him when he was in California.

John was in the Air Force for four years, getting out in 1991.

Michelle graduated from Windsor in 1989, and she recalled that she and John interacted a few times after he came back from the Air Force, the last time being in 1992.

She then moved to Greenville, North Carolina, where she lived and worked for about 30 years.

“I spent the rest of the ’90s basically trying to find myself,” John said. “I bartended a little bit, I did some other things. I opened up my own business in Florida, and then I finally got serious about school.”

That is when he went to Old Dominion University and finished his engineering degree.

From 1992, 25 years passed with no communication between John and Michelle, but “out of contact” did not necessarily translate to “out of mind.”

“He was thinking about me for some reason a couple years prior to finding me,” Michelle said.

In September 2017, their connection was renewed through a long-distance interaction online.

“I’m stationed in Poland at the time, overseas,” John said, “and I’m looking at Facebook one night, and you know how it goes — you see a post, you look at comments from the post, and I see a Michelle,” John said. “I pop it open, I look at the picture, and I’m like, ‘Holy cow! There she is.’

“And so I was like, ‘You know what, let me just try.’ I didn’t know anything about what her life was like or anything. I just said, ‘Hey, how you doing? Remember me?’”

He said she immediately got back to him.

“And that’s how it all started up,” he said.

They kept talking back and forth, and then the opportunity arrived to reunite in person.

“I told her that I was coming into the States for some leave, and I think that was in late October (2017),” John said. “So we decided that we would meet for lunch in Rocky Mount, North Carolina. And so we did, and it was amazing. It was almost like we had never been apart.”

“It just seemed like no time had passed between us,” Michelle said. “We picked up right where we left off.”

“I know the waitress was so mad at us because it took us about two hours to actually order lunch because all we wanted to do was sit there and talk and catch up,” John said.

After that, John and Michelle’s paths separated again for a while, but they stayed in contact.

“I had to go back to Poland to finish out my assignment out there, and then June of ’18, I came back to the States and went to the Pentagon for two years,” John said. “But we kept in touch, and I’d go down to see her occasionally for a weekend or something like that. And so it just kept building from that point on until now.”

John worked at the Pentagon until August 2020 and then received orders to come down to the Naval Special Warfare group in Virginia Beach. He let Michelle know.

“When everything changed is when he said, ‘I’m moving to Virginia. My next assignment will be Virginia Beach,’” Michelle said. “And I was like, ‘Wow, that’s home.’”

He noted that Michelle was working at Wells Fargo Bank at the time and was looking for another opportunity.

“One weekend she came up to see me, and she just went and applied at a local bank here, TowneBank in Virginia Beach,” he said. “They almost immediately hired her, and it was just like it was perfect. It fell into place like it was meant to be.”

“I moved back because this was just part of the plan,” she said. “He’s stationed here for the next few years, and so yeah, it was no question about it. I was coming back. Full circle — I was coming back home to Virginia where I was born.”

John said he and Michelle grew even closer at this point, and it was not long before thoughts of marriage began to take shape.

Michelle explained that John had come up with a plan to propose to her at the site of their first meeting — Windsor High School.

However, something came up with his family that required him to go out of town, preventing his plan from coming to pass, but he told Michelle about it.

As they pondered the circle of their love story, she said they decided “that would complete the circle right there.”

In the years since they had attended Windsor High School, it had been torn down and rebuilt, so John went about trying to pinpoint where the old gymnasium had been located.

He decided that the gym had occupied the space that is now left field of the school’s baseball field.

“So we actually made a little tent, decorated it, and got married in left field on the baseball field where the old gymnasium sat,” she said.

It was a moment 36 years in the making as Michelle wed John, who was her very first boyfriend.

Forming part of the tent’s decorations was a license plate that read, “ME-NJON.” It was the very same one she had on her car in high school that Taylor had removed.

“For whatever reason, I held onto it, and so that became part of our wedding,” John said.

A chaplain from John’s command, Rich Lee, and a local photographer, Brittany Copeland, rounded out those present for the Aug. 14 wedding.

“It was perfect,” Michelle said of the wedding. “There was a little bit of weather, so we were able to get through the ceremony, which was at 6, and it lasted for about 20 minutes. And then we went over and took pictures.”

Michelle said as soon as Copeland shot the last picture, “it started raining and thundering and lightning, so we got done just in time.”

John said he thought it was amazing to be back on the grounds where he and Michelle first met, and he was quite pleased with the wedding itself.

“It was very small, very quaint, but it was pretty awesome,” he said.

“We just wanted to keep it simple, to the point and make that moment matter,” Michelle said, “because it’s just a fairytale in itself, if you will — 36 years later, finding each other.”