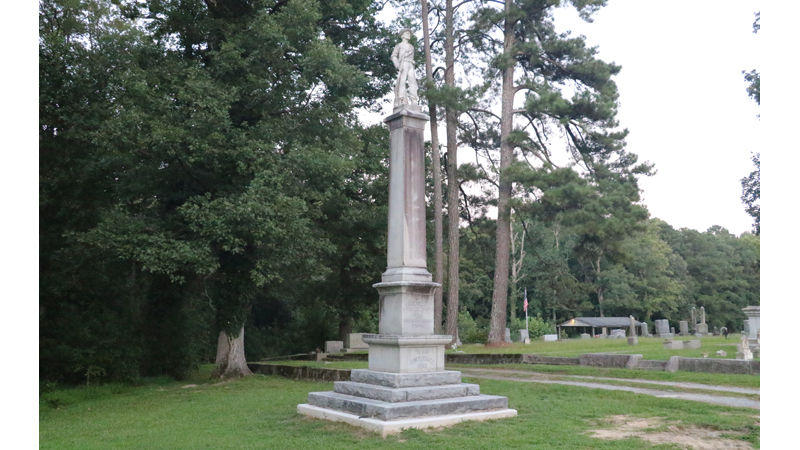 This Aug. 23 photo shows Franklin’s Confederate monument reassembled at its new home in Poplar Spring Cemetery. The reassembly had occurred the previous week. It was removed from Memorial Park on July 31. (Photo by Titus Mohler)

The City of Franklin’s Confederate monument relocation is largely complete now as it has been reassembled at its new location in Poplar Spring Cemetery after having been removed from Memorial Park on July 31.

“I did want to let everybody know that the Confederate statue was relocated to Poplar Spring Cemetery last week and that there’s additional work that needs to be done to grout the statue but that it was moved and the cedar tree was cut down,” she said.

Explaining the cedar tree reference in an Aug. 24 email, Jarratt said, “There was a deformed cedar tree in Poplar Spring Cemetery that was dying and was removed.”

As The Tidewater News has previously reported, the Confederate monument was erected in 1911 by the Agnes Lee Chapter of the United Daughters of the Confederacy, it depicts a stone carving of the Confederate battle flag and bears the inscription, “Love makes memory eternal, to our Confederate dead.” It was originally located at the intersection of Second Avenue and High Street and was moved to Memorial Park, between Clay Street and Meadow Lane, in the 1940s after the Camp family donated the land to the city.

The City Council voted 6-1 on Sept. 14, 2020, to relocate the Confederate monument from its spot in the park to the cemetery.

The lone dissenting vote came from Ward 1 Councilman Mark Kitchen, who said he had spoken with more than 80 Ward 1 residents, most of whom had indicated they wanted the statue to remain where it was.

The City Council ultimately allocated $60,000 as a budget for the relocation project, and Hampton Roads Crane & Rigging Company’s winning bid was approximately $35,000.

After delivering the latest update on the monument relocation Aug. 23, Jarratt said, “I wanted to see if there were any questions or comments about that,” and Kitchen offered comment.

“I think it was handled in a very commendable way, very professional,” he said of the relocation. “Especially whoever decided and whoever took down the tree did an excellent job.”

He said he thought the contractor, Hampton Roads Crane & Rigging Company, and especially the city crew executed the relocation project in an honorable way.

“It was very well taken care of,” he said.

“And after 11 months, I hope this is the last we hear about it,” Kitchen added.

Included in Ward 4 Councilman Linwood Johnson’s motion to relocate the Confederate monument was a stipulation that a new monument honoring veterans of all wars will be erected in its place at the center of Memorial Park.