Board asks commission to look into solar moratorium 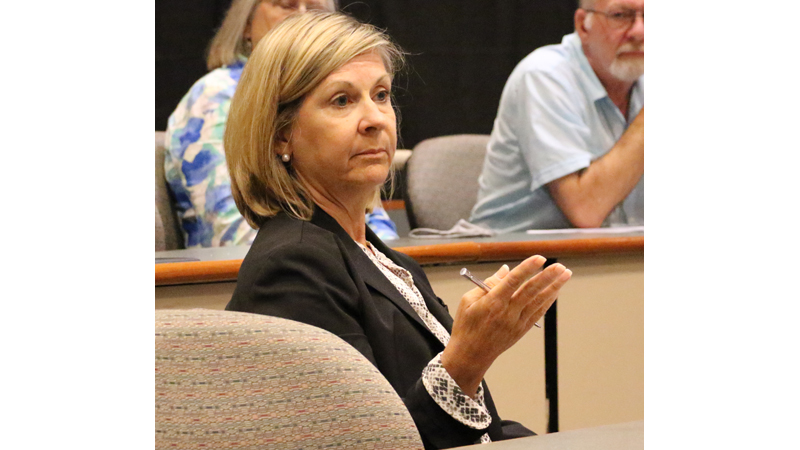 After a discussion on solar facilities that took place amongst members of the Southampton County community, its Board of Supervisors, Planning Commission and a Dominion Energy representative, the board gave direction to the Planning Commission on some things to investigate, including the possibility of a moratorium on solar installations in the county.

The solar discussion, which lasted almost two hours, was the focus of an Aug. 5 joint meeting between the board and commission that was open to the public and held at Camp Community College’s Workforce Development Center in Franklin.

Beth Lewis, the county’s planning director and secretary to the Planning Commission, opened the meeting with a presentation, explaining that the Board of Supervisors had asked the commission in January 2020 to look at the county’s current ordinance impacting solar facilities to determine if and where changes might be prudent.

She said the Planning Commission spent 2020 doing that, and she shared some of the results of its work.

Some of the commission’s concerns included, but were not limited to, decommissioning of solar facilities, the financial benefits to county citizens from these solar installations, the loss of prime agricultural and forestry land, the location of the facilities relative to chuches, schools, homes, towns and rights of way, the security of the facilities and other general concerns.

“No photovoltaic solar facilities in the United States have been decommissioned, so decommissioning costs and effectiveness are not known, and the Planning Commission has been concerned since the beginning that the citizens of Southampton County would end up paying for the cleanup at the end of the 30-year life cycle of these facilities,” Lewis said.

The Planning Commission was looking for guidance from the Board of Supervisors at the Aug. 5 meeting and provided some suggestions of directions it could take in its research; the board affirmed some of the commission’s suggestions.

At the conclusion of the discussion, Jerusalem District Supervisor and Board Chair Dr. Alan W. Edwards summarized the points he judged the board wanted the Planning Commission to pursue based on the discussion.

“We could ask the Planning Commission to look into mitigation or cut back the loss of valuable farmland and forestry land as much as possible, probably by looking at sites that are applicable in the county,” he said. “No. 2, we’re worried about the tax base, and we need to get some studies on that and see what the long-term effects on the tax base is going to be.

Fourthly, he asked how the board felt about talking to the Planning Commission to look very seriously into a moratorium on solar facilities in the county.

Newsoms District Supervisor Lynda T. Updike voiced her support earlier in the meeting for a moratorium, noting there are lots of questions that need answers.

Boykins District Supervisor Carl J. Faison emphasized the importance of being open-minded with regard to solar, but he asked about the possibility of a temporary moratorium.

Edwards asked the supervisors present at the meeting if any of them were against looking into the possibility of a moratorium, and no one spoke in opposition.

“So that would be another thing we would charge the Planning Commission with, so get to work on that,” Edwards said.

A member of the public said that if the county is going to amend its solar-related ordinance, he urged it to protect farmers who rent land from other people to help avoid a repeat of the trial a farmer at the meeting mentioned having gone through.

During the discussion on a moratorium earlier in the meeting, County Attorney Richard Railey advised that a moratorium could invite litigation. Edwards said he was not afraid of that.

Cornwell said he knows the county has been able to hold off solar developers thus far, and he thinks the COVID-19 pandemic had a lot to do with that.

“That slowed the progress of these people coming at us a lot in the last year, but I know my phone rings a lot, and I know some of the other board members’ phones ring a lot with these developers looking to come in here,” he said.

He indicated he holds the developers off by letting them know the county is revising its ordinance but expressed concern about how much longer that approach will work.

“Legally, I don’t know how much longer that will work,” he said. “So yeah, I’d be in favor of (a moratorium) to buy us the time necessary to do what’s right for the citizens of the county.”

A variety of points came up during the Aug. 5 meeting.

There was discussion among community members about the need to think outside of the box with regard to solar installations instead of allowing them to take up so much land. Suggestions were made to put them on roofs of businesses and schools.

Wilson mentioned efforts exist to put them on schools but that there is not enough roof space available overall to avoid using land.

The comment was made that a lot of gains have been made with coal.

Gillette said he does not see how solar is ultimately meshing to benefit the taxpayer.

She later noted that solar uses virtually no county resources.

Members of the community countered that land is a county resource and later added that people’s livelihoods are an investment that is being negatively affected by the entrance of solar projects. Emphasis was given to how solar takes up so much land.

A community member asked if the county can make it so there can be no solar there.

Wilson acknowledged that it is the citizens’ and the county’s right to do that, but she added that much will be invested in solar moving forward, with it serving as a revenue source, and Southampton would be missing out on that. She said if the county denies all conditional use permits, it will not be hearing the merits of the solar projects.

It was highlighted during the meeting that fire ants are one of the hazards that solar facilities draw.

Wilson noted she had never heard of that and would be interested in looking into it.

She also made an offer to the county to supply more information on the economic impact of solar installations.

“There’s a gentleman by the name of Fletcher Mangum, he’s a well-known economist in the state, and he, within the last year, has done a study, and he broke it down by regions of the commonwealth and showed the financial benefits to localities of solar,” Wilson said. “And again, he’s a Ph.D. in economics, and he’s willing to come and speak to any locality that would have him. You can listen to what he has to say and learn from that. I’d be happy to set that up if that would be of interest.”

She also added to a discussion that had taken place earlier comparing revenue sharing to the machinery and tools tax when it comes to solar installations.

“The University of Virginia has set up an online program called SolTax, and that’s free for anybody to go in and use, and you can plug in your different county tax rates and whatnot and it will show, for a 100-megawatt or a 50-megawatt (solar facility), which would be more beneficial — the revenue share or the M&T tax,” Wilson said. “So that’s something that’s out there right now that you can look at.”

A community member asked to know what the revenue is for Southampton County’s existing solar project, and Lewis said she was hoping to get that information from the commissioner of revenue. Wilson later returned to that subject.

“I think that looking at the financials from your existing solar project would definitely be interesting, but things have changed, and now you do have the revenue share, the different M&T tax,” Wilson said. “Typically what Mr. Mangum has found is that when land is rezoned for solar projects, that’s an average of an 11% increase in the assessment. So you’re looking at a bump in your real estate taxes, then your $1,400 per megawatt per year, increasing at 10%, and then the siting agreement, which now, by law, a developer has to negotiate a siting agreement with the locality. So it’s not even any kind of option.”

She also shared the position and rationale of Dominion Energy when it comes to renewable energy. She said that because of the increase in efficiency in solar panels and inverters, solar now has the lowest levelized cost of energy. She noted that this is documented.

In October 2020, PopularMechanics.com reported that solar is officially the cheapest electricity in history.

“Even before the Virginia Clean Economy Act was passed, (Dominion Energy) decided (it was) going 100% renewable, and we have shareholders to answer to — we didn’t do that because we just thought it was a good idea,” Wilson said. “We did it because it was in the best interests of our shareholders, our rate-payer customers, our employees and the communities we operate in.”