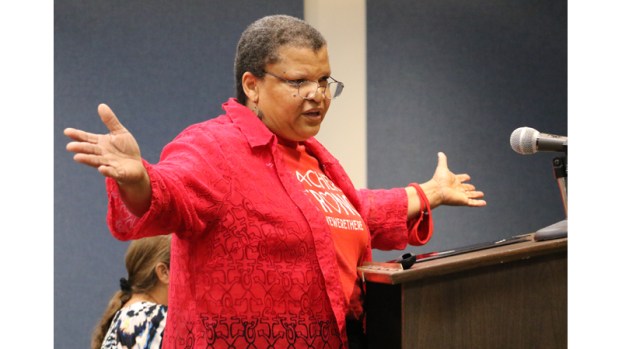 Evette Wilson, a UniServ director with the Virginia Education Association, serves as a spokesperson for Southampton Middle School teachers at the July 27 meeting of the Southampton County Board of Supervisors. (Photo by Titus Mohler) 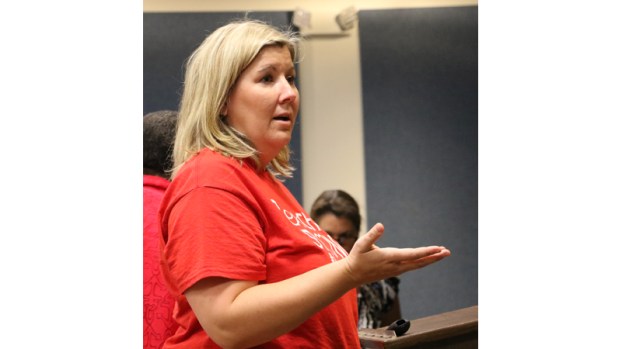 Southampton Middle School teacher April Griffith answers questions from the Southampton County Board of Supervisors on July 27, sharing what working conditions are like for middle school teachers in the school system. (Photo by Titus Mohler)

Southampton Middle School teachers declared through a representative on July 27 that they are planning to take legal action against Southampton County Public Schools after they say the superintendent acted outside the bounds of her authority by dismissing a grievance the teachers had expressed in which they asked to be compensated for extra work required of them during the COVID-19 pandemic.

Evette Wilson was the spokesperson for the teachers, and she was addressing the Southampton County Board of Supervisors at its July 27 meeting because the teachers expect the board will be called upon to help fund the school system’s legal effort against them.

Wilson is a UniServ director with the Virginia Education Association, and UniServ, short for Unified Services, is a program of the National Education Association intended to provide expanded staff services to its members and local affiliates, as noted at mea.org. A portion of every NEA member’s dues is used to help fund an office and staff to assist the member’s efforts to improve education and solve his or her professional problems.

“I am here because the teachers are dedicated to their students, families and their communities,” Wilson said as she began her speech to the Board of Supervisors during the public comments portion of the meeting. “They are honored to serve Southampton and value their jobs, but they are concerned about what they believe is a lack of financial transparency and serious contractual and state law violations.”

She said there were two issues she wanted to bring to the board’s attention.

First, she noted there was a school board budget workshop this year that included a PowerPoint presentation that showed numbers related to teacher salaries in 2019 and 2020 that were not accurate based on teachers’ contracts.

“The raises were not even 1% in many cases,” she said.

Second, she said all Southampton teachers’ contracts include a paragraph that applies to state laws and regulations to the contract.

“Virginia Department of Education regulations state middle school teachers must receive additional appropriate compensations for teaching more than 25 class periods or 150 students per week,” she said. “The exception is P.E. and music teachers, who have the same 25-per-week class limit but can be assigned 200 students.”

Wilson added that VDOE regulations also require school divisions to provide teachers with one planning period per day or compensate for their extra work.

“The purpose of these laws is to ensure quality of instruction for students,” she said. “The laws require school divisions to give teachers time for hours spent planning and preparing standard class and student loads and additional compensations for class overloads.

“It is both a carrot to a teacher to work extra hours required to deliver quality instruction when schools are short staffed and a stick to school divisions to discourage inadequate staffing and overloads to ensure students receive quality instruction,” she continued.

She stated that teaching is more than just bell time, with each class requiring a different lesson plan, even if it’s the same subject, as each class and each individual student require differentiated instruction, varied materials and activities suitable to their interests and abilities.

“The superintendent exceeded both the maximum number of students, the maximum class loads and the minimum number of planning periods without compensating teachers, which state law and contracts require,” Wilson said.

She added that Southampton County Public Schools is well aware of these regulations.

“Why do I say that?” she asked. “Because they paid appropriate compensations for overloads to middle school and high school teachers in the past.

“Therefore, there are more than 20 teachers who were forced to teach 28-54 additional class periods per week last year, with some teachers having in excess of 160 students,” she continued. “Some teachers also had overloads the entire 2019-20 school year.”

Teachers met with their principal, Darian Bell, and Superintendent Dr. Gwendolyn P. Shannon this year and gave them the regulations and proof of their overloads in April, Wilson continued.

“They asked for the wages that they were owed,” she said. “They followed up with two letters. The superintendent said the matter was under review but never followed up.”

Wilson noted that the teachers then filed a grievance, seeking a hearing with the superintendent and the school board.

“The superintendent dismissed the grievance and two appeals out of hand,” Wilson said, adding that she found Shannon’s letters “disrespectful and demeaning.” “They were also hypocritical because the administration misinterpreted state regulations to deny the teachers due process but refused to even discuss regulations that clearly required the division to pay the teachers what they’re owed.”

Wilson later added that Shannon responded in writing stating that the teachers do not have anything grievable, “so she dismissed it, but in this process, she does not have that authority; the board does.”

“Since the school administration has refused to address this issue, to even allow the teachers the opportunity to be heard at grievance hearings, the teachers are left with no other recourse but to pursue legal action,” Wilson said during her speech. “We anticipate that the school division will seek funding from the Board of Supervisors for this purpose.

“We hope each supervisor here tonight will ensure that any money spent or allocated (goes) solely to pay the teachers what they’re owed under their contracts and state law rather than to lawyers solicited to fight them,” she continued.

Wilson said the teachers also believe the school board finances should be audited for the past few years to ensure funds have been spent properly.

“We hope the supervisors will examine the facts and support Southampton teachers and their families as they have supported Southampton students,” Wilson said in conclusion.

As she fielded questions from supervisors, Wilson elaborated on the grievance process and even spoke to the superintendent’s argument against the teachers.

“We send all of the (grievance) documents moving up to the superintendent,” Wilson said. “The superintendent argues that we did not follow a sequence of time that she thought was valid, but we, in fact, did because the teachers did go through the informal and the formal. And so we’re playing with dates and numbers and times, but the bottom line is the code that she was very well aware of was violated.”

Wilson also spoke about the bonuses the school system recently handed out to its employees.

“When you hear that, I want you to discern every employee in the school system received that (money), but every employee in the school system did not do those additional hours like those middle school teachers did,” she said. “So the burden of that additional class instruction was on those teachers and their families in ’19-’20 and ’20-’21 years. So that’s the basic argument of the grievance.”

Just before the public comments period, the Board of Supervisors shared how work is underway to facilitate better relations and communications between it and the school board.

“I’m glad there is beginning to be some communication between both bodies, because in the interest of Southampton County school students, there needs to be,” Wilson said.

Newsoms District Supervisor Lynda T. Updike, who thanked Wilson for coming, said, “I’ve gotten several phone calls from teachers who said that they were retiring early or they were leaving because of working conditions.”

Wilson invited SMS teacher April Griffith to come up and speak to that, and Griffith described classrooms with significantly varying temperatures that persist despite attempts to fix them, and she also noted how some COVID-19 precautions and cleaning supplies either were not in place when it was said they would be or supplies would constantly run out.

Griffith said she assumed that is what the teachers were speaking about to Updike.

“I think it’s lack of support from the higher-ups,” Updike said.

“It is a problem,” Griffith agreed. “I just feel like they don’t ever listen to the teachers. The teachers aren’t listened to, and we’re the ones in the trenches. We’re the ones that are with the kids 24/7 it feels like almost sometimes. And we do it because we love the kids. We love what we do. We just wish we had more support from admin, from above.”

Jerusalem District Supervisor and Board Chair Dr. Alan W. Edwards said, “I’ve talked with a number of teachers who came to me, and a lot of them said they didn’t feel they had a method where to take their problems to, and a lot of them were afraid to. Is there an intimidation factor being used there?”

“A lot of my coworkers will not come forward because they do feel like there will be some type of retaliation,” Griffith said.

She used one of the teachers in the grievance process with her as an example.

“We’ve had multiple teachers leave this year, multiple teachers,” Griffith continued. “They’re going to other counties. Some, it’s for the money, but not all of them … It’s for the way things are going. They don’t like the way things are going in the county school system. So they’re seeking other places to teach that will be better for them, a better environment for them and will respect them as an educator, because I think a lot of us don’t feel respected as educators in the county.”

“Thank you for being brave,” Edwards said.

The Tidewater News reached out to Shannon last week with questions via email but did not receive a response by press time.