JOYNER – Marvin Lewis Everett, 91, passed away on Aug. 16, 2021. He was a lifelong resident of Joyner and a son of the late William Lawrence and Rena Norsworthy Everett. He was predeceased by a son, Jeffrey C. Everett and a brother, William Lee Everett and wife, Catherine. 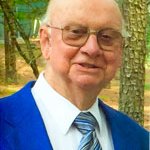 Marvin was the oldest member of Joyner United Methodist Church where he served in numerous capacities. He graduated from Drewryville High School, Military Police School and the two year Veterans Agricultural School. He was a proud veteran of the U.S. Army serving 1 ½ years in Korea as a Sergeant in the Military Police, where he received several awards and a Korean Presidential Citation.

Marvin was very active in his community serving as Past President and Charter Member of Joyner-Gray-Yale Ruritan Club, Zone Governor–Holland District Ruritan National and Past Master–Courtland Masonic Lodge No. 85.

He was a founding member of The Peanut Coalition, The American Agricultural Movement and The VA-Carolina Peanut Co-op. He was a past President of the Southampton County Farm Bureau where he was an avid spokesperson for agriculture on the county and state levels by serving on numerous state agricultural boards and advisory committees and very proud to represent District 13 on the Board of Directors for Virginia Farm Bureau Federation and Affiliated Companies from 1990 to April 2007.

Condolences may be registered at www.wrightfuneralhome.org