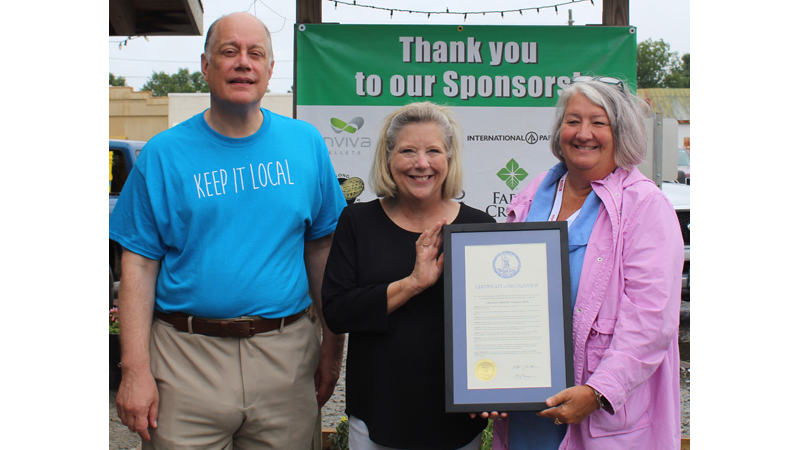 The Franklin Farmers Market was part of Virginia Farmers’ Market Week, which highlights the economic and overall community impact of farmers markets across the state.

Dr. Kim Hutchinson, executive director of the Virginia Farmers Market Association, was on hand Aug. 7 at the Franklin market to present a certificate of recognition of the special week to Volunteer Market Manager Karen Cobb and Franklin Southampton Economic Development Inc. President and CEO Karl Heck.

She said that in Virginia, agriculture is the No. 1 private industry in the state, and farmers markets help generate about $4 billion.

“We have over 20,000 farmers and producers that work at our farmers markets across the state of Virginia,” she said. “So when you really sit to look at the economic impact of the farmers market, we’re glad to be able to highlight it during something like Farmers’ Market Week.”

The certificate of recognition made note of a variety of key details about farmers markets in Virginia.

“The 280 are Virginia-grown farmers markets,” Hutchinson said. “They’re those that are registered with the Department of Agriculture as Virginia-grown.”

The certificate continued by stating farmers’ markets offer a way for new farmers to enter the marketplace by selling directly to the public. It stated that vendors at farmers’ markets often educate their customers on agriculture, farming practices and environmental stewardship, including the conservation of land, water and other natural resources.

“The average distance traveled for food at a farmers market is 35 miles or less in the state of Virginia,” Hutchinson said. “And so it’s not coming up through Sysco and losing its nutritional value because it sat on a container ship on the (Suez) Canal and then it docks and then it moves wherever it’s going.”

The economic impacts of farmers’ markets, according to the certificate, include direct benefits to farmers and affiliated businesses but also include other benefits to the community in stimulating revitalization, enhancing community engagement and preserving farmland through economic viability.

One other thing the certificate pointed out was that farmers’ markets have shown great resiliency in the practice of their mission to connect farmers to communities while keeping Virginians safe during the COVID-19 pandemic.

“I was glad this year that we were able to incorporate the piece about COVID, which is different than what we’ve been able to do, obviously, in the past,” Hutchinson said. “With COVID, as all industries found, the world changed and ended upside down on its head.”

She noted that when Virginia first went into its state of emergency, the farmers markets were not deemed essential.

“So I worked hand-in-hand with the governor and the secretary and the commissioner of agriculture to be able to get farmers markets to be able to open even though they weren’t deemed essential,” she said. “And by doing that, we committed to only doing agriculture, horticulture and hygiene products and to being online with safety protocols in place and being able to get nutrient-dense food out to the community.

“And from that, it really showcased the resiliency and the flexibility of farmers and producers and their desire to be able to serve their community, being able to turn their entire business model upside down, and the cost incurred,” she added.

She noted there was a supply chain shortage due to major commercial, institutional processing plants being shut down, leading to people in grocery stores seeing empty sections where meat used to be found.

She later summarized 2020 by saying, “We were able to really show during COVID the value of shopping at a farmers market.”

A sweet deal for Virginia FFA