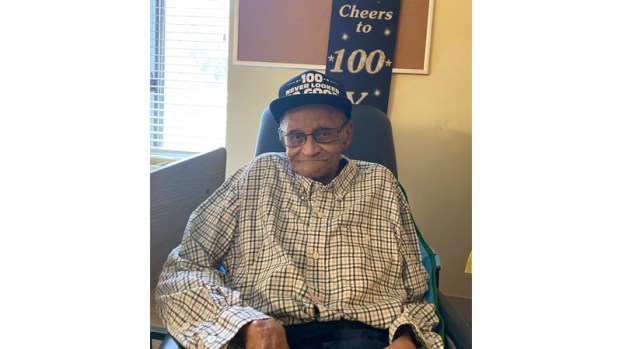 Napoleon Crocker smiles for a photo Aug. 9 with the trappings of his 100th birthday party in view. Crocker, who has lived in Franklin for all but two years of his life, turns 100 on Aug. 12. (Photo submitted by Pat Hill) 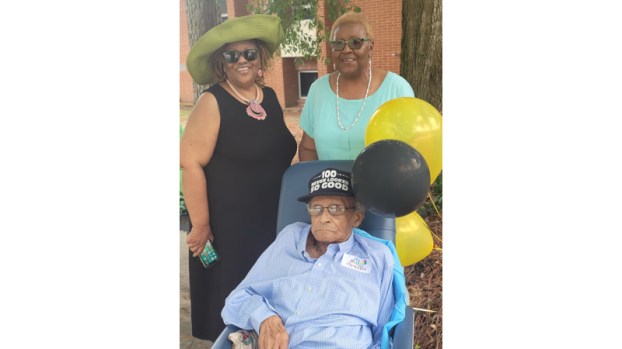 Pat Hill, standing on left, and Joyce Coats, standing on right, join their father, Napoleon Crocker, for a photo as they celebrate his 100th birthday during a party Aug. 8. Crocker, who resides at East Pavilion in Franklin, will officially reach the milestone Aug. 12. (Photo submitted by Pat Hill)

Napoleon Crocker, of Franklin, reaches a major milestone in his life this week as he turns 100 on Aug. 12.

He greeted the event, as it approached, with enthusiasm.

His family threw him a 100th birthday party celebration Aug. 8 at East Pavilion, the long-term residential facility where he lives in Franklin. After a gathering with family, he went outside to take in a parade of people from his church, Greater Oak Grove Baptist Church.

“It was real nice,” he said of the celebration.

Two of his five children are still living, his daughters Pat Hill and Joyce Coats. They both shared their thoughts on their father’s keys to longevity.

Coats noted that he would strategically get rest at different points throughout the day, working early in the morning and then eating his breakfast and taking a nap. Then when it cooled off, he would go back in the afternoon and evening and work some more.

She also noted that a contributing factor to his long life was how well he looked after his mother.

“The Bible says that you honor your mother and father that your days may be long; he definitely did with his mom,” she said. “He made sure that she was well taken care of throughout her life.”

Crocker was married for 65 years until his wife, Emily Crocker, passed away in 2014.

“My dad was really spoiled because for 65 years, my mom basically cooked three meals a day for him,” Pat Hill said. “It was always home-cooked food, so we didn’t do the eating out and eating of processed foods.”

Thinking more on what helps account for her dad’s longevity, she later added, “I do believe — and we all talked about this — that it’s just the way of eating natural foods that he grew himself. And when he didn’t grow them, he would get them from another farmer that did.”

Hill noted that she just turned 65 a couple weeks ago.

She shared what it has been like having her father be there for her for 65 years of her life, agreeing that it was a privilege.

“We celebrated my dad’s 98th birthday with about 60 family and friends in Franklin, and during that time, I did a reflection as a child as well as an adult,” she said.

Recalling some of those reflections, she mentioned that her father became disabled when he was 42 or 43. He seriously injured his knee and based on the resetting of it, he was not able to work again.

“So my dad was basically at home, and as a child, I talked about how he was always a provider,” she said.

She said this provision was not just the normal things — food, clothing and shelter — but extra things as well, like making sure his children did not put on cold clothes during the winter.

“He made sure that our shoes and our clothes got warmed up by the heater before we put them on in the winter time,” she said. “And again, part of that is also because you don’t have money for children to be getting sick.”

If it rained, he would take his children to school so they would not get wet.

“We had very little growing up,” she said. “We were very poor. However, the essentials that we needed as a family he made sure that we had. His if you want to call it hobby or way of providing for his family also included a vegetable garden that he took lots of pleasure in.

“That ran from spring to almost fall depending upon what he was growing, but it was daily going out and making sure there were no weeds in the dirt and that he had no footprints in his garden and that it was all watered nicely and all of that,” Hill continued. “And then from that, my mom would be able to can food so we could have it for the winter.”

She said he did all the picking in the garden.

Gardening was one of the things that he prided himself in, she added, noting that he probably did gardening until he was about 93 or 94.

“The only reason he stopped then, he said, (was) because the animals started eating up the plants, so then he just decided to give it up,” Hill said.

She noted that in addition to growing vegetables, he would also smoke his own meat.

Lacking any major health issues for most of his life outside of his knee injury, Crocker lived at home until last year.

“July of 2020 is when he could no longer live independently because of not being able to walk, and that’s when he went to the nursing home,” Hill said.

Being born at home in Franklin, Crocker has lived almost his entire life in the city.

“Two years he was in the Army he was not in Franklin, but other than that, he has been in Franklin the entire time,” Hill said.

She noted he served actively in Greater Oak Grove Baptist Church in Sunday School and as a trustee, a role he served in for many years. The church has made him a trustee emeritus.

He was also very active in the American Legion, Hill stated, as he served as a local post’s treasurer for about 30 years.