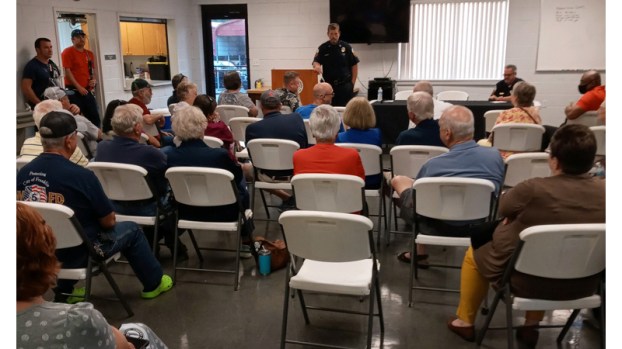 Franklin Police Chief Steve Patterson talks with a group of citizens at Hunterdale Volunteer Fire Department on July 27 in the second “Chilling with the Chief” event that he has been a part of. (Photo submitted) 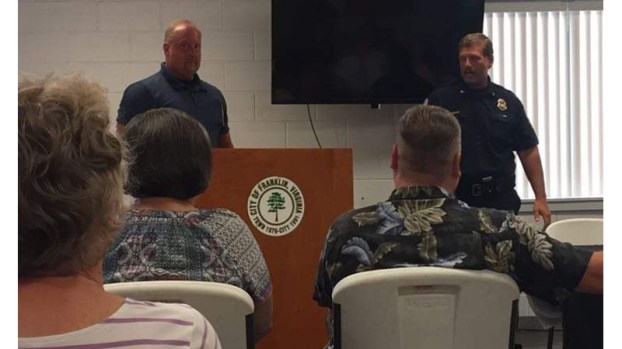 Thirty-six people from Franklin and Southampton County enjoyed “Chilling with the Chief” July 27 at Hunterdale Volunteer Fire Department as Franklin Police Chief Steve Patterson continued his series of events aimed at building a good relationship between his department and the community.

Patterson has helped organize other gatherings in the mornings, but this was the second part of the “Chilling with the Chief” series that began the evening of May 26 when community member Jesse Evans organized the first part at the Franklin Sportsman’s Association.

On July 27, many questions were asked of the chief, including how to help the police department make Franklin a safer city in which to live. The role citizen cooperation plays in combating crime was also discussed.

Introduced at the event by Ward 1 Councilman Mark Kitchen, Patterson answered a lot of tough questions while being upfront about the law enforcement needs and strengths of the city that he and his officers protect.

The event was attended by citizens from all corners of the city, as well as several city council members and clergymen.

From the police department, Patterson was joined at the event by Sgt. Scott Halverson, Sgt. Christopher Thomas and Officer Robert Brown.

On the City of Franklin Virginia Police Department Facebook page, the department posted thanks to Kitchen and the Hunterdale Volunteer Fire Department for hosting part two of “Chilling with the Chief.”