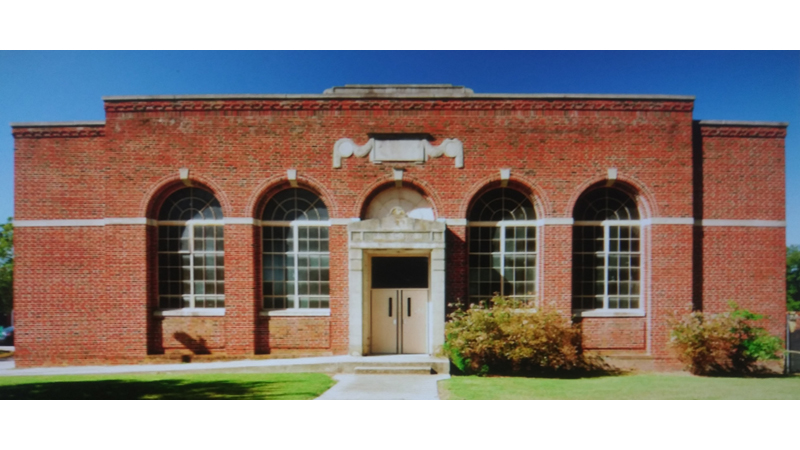 The Charles Street Gym, which was approved for listing on the Virginia Department of Historic Resources register in 2019, is one step closer to restoration after a needed Franklin City School Board vote July 15. (Photo submitted)

The Franklin City School Board took a step forward July 15 in the effort to restore the Charles Street Gym, which has been in use since 1936.

Ward 1 Board Member and Vice Chair Robert Holt noted during the July 15 meeting that he and Ward 6 Board Member Jerry McCreary have been working on the project relevant to the gym.

“The Charles Street Gym is on the Virginia register of historic properties, and we have some assurances that we will be able to get some grant funds that will allow us to bring that property back up to its original state, pretty close,” he said. “In order to do that, we have to provide the grant-funding agencies an engineering and architectural study of what it would cost to do that.”

He told the board that they had received the proposal for the study, and the study would cost a little more than $19,000.

The school board ultimately voted 6-0 to approve the purchase order. Ward 3 Board Member Tonya Smith was not at the meeting.

The Charles Street Gym in Franklin was recognized for its lasting value by the Virginia Department of Historic Resources and included as one of 16 places to merit listing on the Virginia Landmark Register in 2019.

Before the school board’s vote July 15, McCreary asked Holt if the architect had provided a timeline for completion of the study.

“They’re ready to go, (is) my understanding, as soon as we approve the payment,” Holt said. “So I think we can get this done within 60 days.”

In some of his comments right before the board vote, McCreary, along with Ward 2 Board Member and Chair Amy L. Phillips, spoke to the enduring support present in the community to restore the gym.

“I would just comment that I know there’s a number of people over the years that have brought to various boards’ attention the gym and people in the community,” McCreary said. “So I think, as Mr. Holt said, there is substantial community support for funding for it, so I think this is a good step forward to preserve some history of Franklin City Public Schools and not only preserve that history but provide continual use for current programs.”

Phillips said, “I think this (project) will also give us some of those long-anticipated improvements to that building. Some of us have had feet in there for many years, and we know that there’s been some issues that needed to be addressed, and I think this is going to give a great opportunity for that as well.”

The most significant part of the discussion prior to the board vote centered around how the programs currently using the gym — wrestling and robotics were mentioned — would be affected by the study and the subsequent construction.

Holt offered assurances that no one would need to vacate the building during the study.

“No,” he said. “We’ve gotten an approval now for the wrestling team, perhaps, to go in for six months because there won’t be any actual construction to speak of until about November, December, maybe January.”

It was concluded that the construction schedule could conflict with either the preseason or the season for both wrestling and robotics.

Phillips noted that the robotics and wrestling coaches would have their programs’ respective scheduling information, and then she addressed Dr. Michael Thornton, who is serving as division administrative supervisor, representing the superintendent’s office until Superintendent Dr. Tamara Sterling returns Sept. 1 from a leave of absence.

“Dr. Thornton, can you get with (the coaches) to get schedules so that we can make sure from an operational standpoint we aren’t inhibitive of this (construction) process but that we also are not inhibitive of those teams being able to utilize it if necessary for what they need?” she asked, and Thornton took note.

“I think it’s a matter of coordination, basically,” McCreary said, asking if there is a point person in the office that can be communicated with reliably throughout the process. “If we had one person to help coordinate working with the architects and the different schedules, that would be good.”