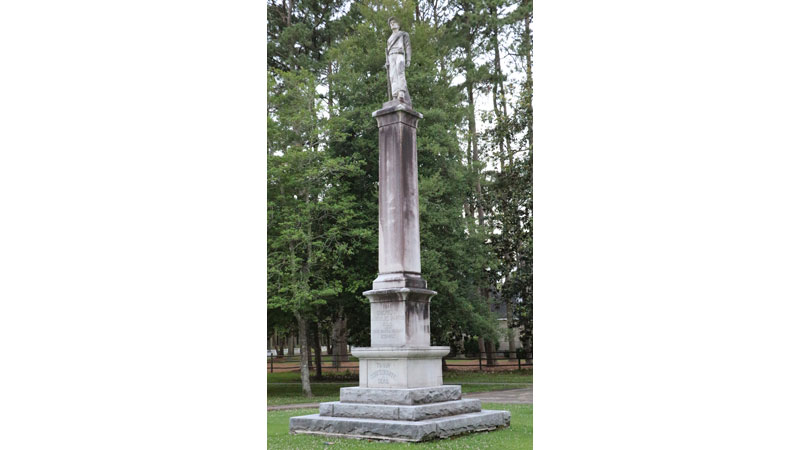 Franklin’s Confederate monument, pictured here at Memorial Park, was removed from the park July 31 and partially reassembled at Poplar Spring Cemetery, with additional work to come. (Photo by Titus Mohler)

The City of Franklin’s Confederate monument was removed July 31 from Memorial Park where it has stood for more than 50 years.

The City Council voted 6-1 on Sept. 14, 2020, to relocate the Confederate monument from its spot between Clay Street and Meadow Lane to Poplar Spring Cemetery.

The removal, which had been delayed once due to rain, came slightly ahead of recent expectations from the contractor, Hampton Roads Crane & Rigging Company, though the company’s president, Jim Speegle, did indicate there was no set date and that there would not be much advance notice.

“The contractor had a break in his schedule, and it was taken down yesterday,” Franklin City Manager Amanda C. Jarratt stated Aug. 1.

Originally, the monument’s removal and reassembly had been planned as a two-day process.

“Now we’re going to try to do it in one day,” Speegle said earlier in July. “It’s probably going to happen in August.”

Jarratt said that part of the monument was reassembled at the cemetery July 31.

“They have additional work to do,” she said.

As The Tidewater News has previously reported, city staff demolished a gazebo in the cemetery and poured a concrete pad in its place large enough to accommodate the monument.

The City Council had allocated $60,000 as a budget for the relocation project, and Hampton Roads Crane & Rigging Company’s winning bid was approximately $35,000.