Fat Cat is back 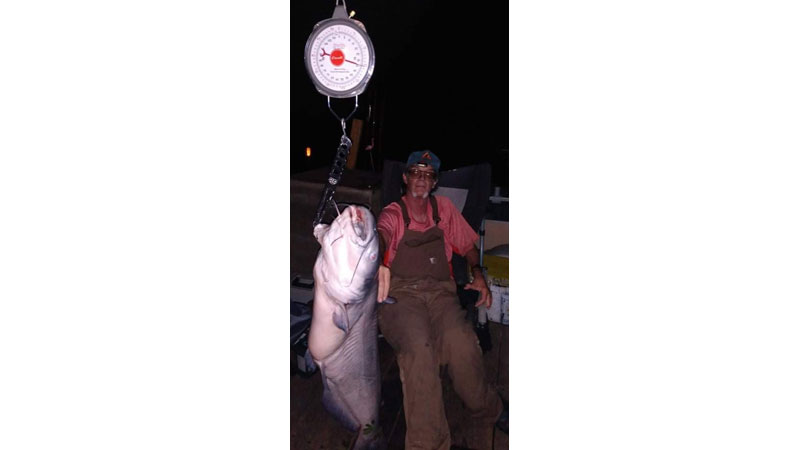 Whispering Bear, Spirit of Moonpie and I spent July 21 through July 23 on the Nottoway below Delaware. The water was normal, a little dirty, rising and moving pretty well. Air temps ranged from 63 to 92 degrees. It was really too hot and humid the first day, and I ’bout couldn’t take it. Getting soft in my old age, haha.

Trash on this trip was a little more than normal in the Nottoway on this part of the river. Regular bottles and cans, but we did get a lard bucket out of the river and two more mylar balloons. We only saw and removed two derelict limb lines, no tags and with hooks dangling.

The water had an oily look to it in some places, but I could not smell petroleum, so I’m not sure. Next time, if I see this, I will check upriver from the Route 671 bridge that is being replaced to see if I get the same oily artifacts.

The fishing on this trip was, for the most part, not good. I caught only a few small bass and only one jack. It was like the fish would not commit on the strike. I did catch a citation mud gapper, though. So fishing was slow.

However, whew, the Fat Cat is back on track. After being skunked the first night, on night two near the end of the cat session, the big cat rig took off. When I saw that gallon milk jug disappear underwater, I knew it was something big. The problem was, I didn’t know what it was.

After grabbing the rod out of the rod holder and making a few turns on the big Abu Garcia reel, I heard a huge slap on the water… like a beaver does when it gets upset. I looked at Whispering Bear and said, “Oh no, I think we done hooked a beaver.”

Now I knew beaver don’t go after fish, which is what I was using for bait, but that don’t mean it wouldn’t be possible for some freaky thing to happen like a beaver getting hooked on that rig.

I resumed cranking the fighting maelstrom until finally I got it within the boat’s lighting systems. I was both relieved and shocked as the large, shadowy figure glided through the eerie effects of the boat lights mixed with the ethereal effects of the nearly full moon. Thankfully it was not a beaver but a 34.12-pound blue cat.

What had happened was that the water that night was running so fast that when I started reeling that big sucker in, it came to the surface… like it was a water skier being pulled up. That’s when it slapped its tail like it did.

So anyway, then began the process of trying to get such a big fish all the way up into the pontoon boat. Between the three of us, we managed to get it weighed — but barely. I tell ya, I don’t know what we are going to do if we hang one bigger than this on the pontoon boat.

Maybe I need a St. Bernard instead of a Moonpie for those heavy lifting experiences I hope we see a lot more of on the two rivers we call the Nottoway and Blackwater.

JEFF TURNER is the Blackwater Nottoway RiverGuard. To contact him about river issues, send him an email at blknotkpr@earthlink.net.