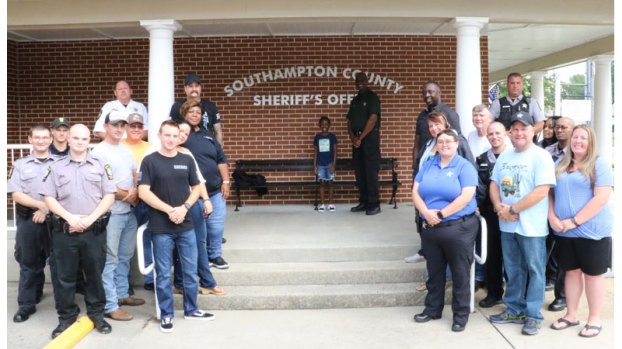 Southampton County Sheriff Josh A. Wyche Sr. and 8-year-old Chloe Byrd, right of center, present the new sheriff’s office sign on the office building, along with members of the sheriff’s office and their family who were among those to help make the new sign possible. (Photo by Titus Mohler) 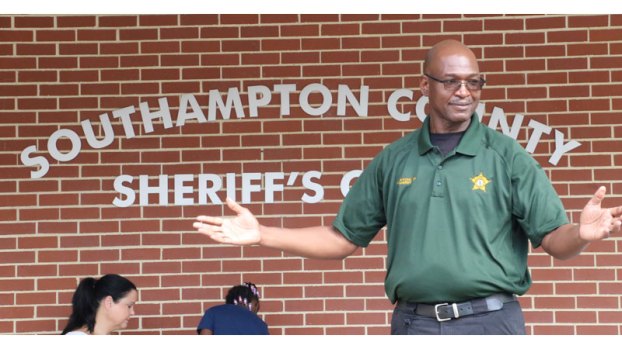 Southampton County Sheriff Josh A. Wyche Sr. expresses his gratitude to those gathered July 24 for their help in making the new sheriff’s office sign behind him possible. (Photo by Titus Mohler)

It had been a long time since the Southampton County Sheriff’s Office had its name on its building, but members of the office helped put together the money, and the sign was unveiled the morning of July 24 to the applause of supporters.

“I feel a whole lot better now that we have the name on the wall,” Sheriff Josh A. Wyche Sr. said shortly after removing the cover to reveal the new sign, adding that without the sign, one could drive by the office and not know what kind of office it was.

Wyche, who has been with the sheriff’s office for nearly 38 years, said he was told by another veteran of the office that its name was formerly on the building, but it was many years ago.

Wyche recalled how the discussions began on the new sign project and noted that a simple, straightforward thought came out of them.

“We need to put a name on the building,” he said, noting that once the office put it out there that this was what it wanted to do, people started stepping up to help.

The money to create the sign was raised within two days, with the needed amount coming almost within the first day.

While some contributors could not be present for the unveiling, 21 people joined Wyche for the event Saturday morning.

“Everybody here is basically from the sheriff’s office,” Wyche said. “Of course, we’ve got some spouses. Other than that, they’re either a deputy or one of our jail staff or a dispatcher.”

He thanked everyone for their participation in the project.

Assisting Wyche in unveiling the sign was 8-year-old Chloe Byrd.

“She’s the daughter of one of my school resource officers and dispatchers,” Wyche said.