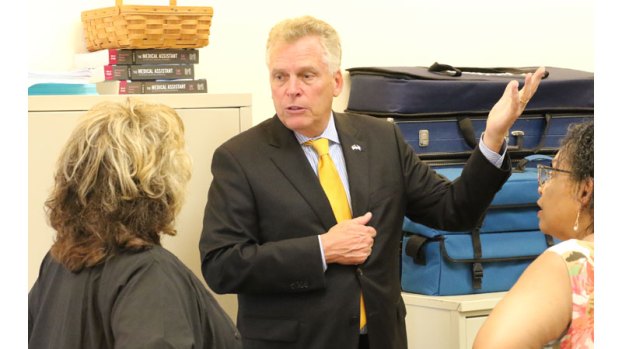 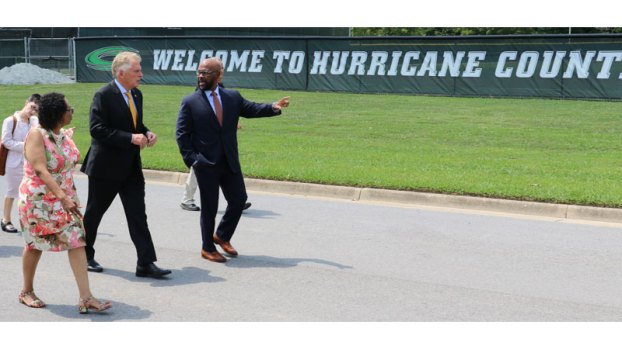 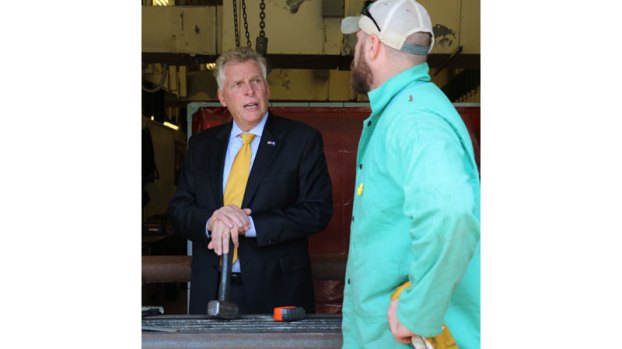 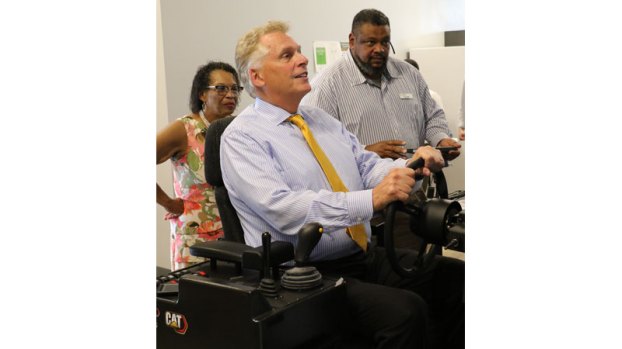 Completing his campus tour at the Camp Regional Warehouse and Distribution Training Facility, Terry McAuliffe works with one of the simulators students use in their training to become heavy equipment operators. The visit came amid his gubernatorial campaign. (Photo by Titus Mohler)

Terry McAuliffe visited the Franklin campus of Paul D. Camp Community College on July 15 as part of his higher education tour amid his campaign to become the governor of Virginia.

He did plenty of listening and asking questions of Camp administrators and teachers, and he also shared a few details from his new higher education plan.

McAuliffe’s campus tour began at the Workforce Development Center, where he spoke briefly with Health Care Instructor Dawn Guy to learn about the offerings available to students.

From there, Camp Community College Interim President Dr. Corey McCray led him to another building where McAuliffe visited more than one learning space and spoke to multiple instructors, including Lead Trade Instructor Steve Street.

The tour ended at the Camp Regional Warehouse and Distribution Training Facility, where McAuliffe was able to try out one of the simulators that students use in their training to become heavy equipment operators.

Afterward, McAuliffe shared some comments while filming a video.

“We’re here at Paul D. Camp, the greatest community college in the world,” he said, commending McCray for the work he and his staff have done.

McAuliffe also recognized Del. Roslyn Tyler, who represents the 75th District, which includes Franklin, and who accompanied him throughout the campus tour.

Having successfully completed some tasks on the simulator under the direction of Trades Instructor Darren Mitchell, McAuliffe said, “We’re all learning new careers today. That is what Virginia is all about — making sure that every child has a pathway, a better outcome and a higher pay if you’ll come and get a post-secondary, some type of degree or credential. And that’s what Paul D. Camp’s about.”

A synopsis of McAuliffe’s new higher education plan is provided at TerryMcAuliffe.com, where it states that the plan will give students a clear pathway to the workforce while removing the barriers preventing them from succeeding.

“As governor, Terry will create new, affordable pathways into the workforce by expanding workforce training programs at our community colleges and streamlining financial aid so more students can benefit from higher education,” the summary noted. “Terry will also ensure that once students are in school, they are able to make it to graduation by making it easier to transition to higher education, between institutions and from education to the workforce. He will also ensure our students have access to the support they need to reach their goals.”