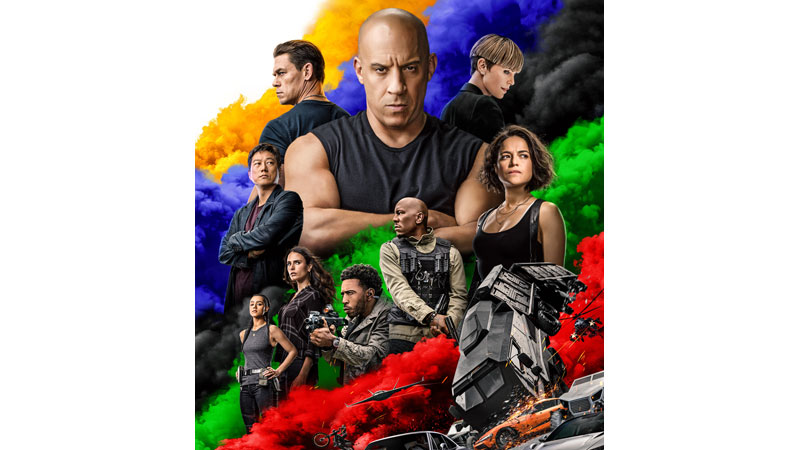 The Fast and Furious franchise returns with the ninth — yes you read that correctly, ninth — part of the series, F9.

Think of F9 as part Dom Toretto (Vin Diesel) origin story and part heist story that the franchise is known for. Through flashbacks, we are shown where Dom developed his love of cars, as well as his first brush with criminal life after he takes revenge on the man responsible for the death of his father. As part of this focus on Dom’s background, we are also introduced to his and Mia’s brother Jakob (later played by John Cena), who was banished from the family after Dom suspected him of sabotaging their father’s race car, which led to his death.

This fraught relationship between brothers comes to a head when Dom and his merry band of thieves — Roman (Tyrese), Tej (Ludacris), Ramsey (Nathalie Emmanuelle) and Letty (Michelle Rodriguez) — are called in to investigate the downing of Mr. Nobody’s plane. The plane had been carrying Cipher (Charlize Theron), but was attacked to free her. While investigating the plane’s wreckage, the group finds half of a device called Ares, which can control any computer in the world. The crew is subsequently attacked by the now-adult Jakob, who steals Ares on behalf of his wealthy employer. Jakob then sets off on an international journey to get the other half of the device and you know, prepare to dominate the world or something. Unless he is stopped by our favorite gang of heroes, of course.

Below are the elements I liked most and least about the film. Of course, this is a FAST AND FURIOUS movie so at its worst, it is still going to be an entertaining ride. I am just excited for a huge blockbuster film like this to draw more people back to the theaters. Because of course this is the kind of movie you need to see on the biggest and loudest screen possible.

Note: There is a mid-credits end scene that is seemingly setting up the next episode in this saga, so don’t leave theaters until you see the return of an old friend.

What other blockbuster franchise has a more diverse cast than FAST AND FURIOUS? The longevity and success of this franchise, anchored by incredible performances from the inclusive cast, shows Hollywood that these are the kinds of movies and voices audiences want to see amplified on-screen. And we will pay big bucks to do so, as shown through the insane box office numbers for each film. Fingers crossed F9 has similar success and shows movie audiences are back, ready to appreciate blockbuster movies again in theaters.

F9 leans even more into the extreme car stunts and situations that has made the franchise so popular. If I can say one thing about the series, it is that time and time again the filmmakers ensure the stunts are not stale. Fans have long questioned when the series will go to space and well, by Neil Armstrong, they finally did it this time. Are most non-fans (and probably critics) going to roll their eyes at some of the ridiculousness in this film? Absolutely. But this movie isn’t made for the haters and if you are really going to start questioning plausibility, have you even seen a FAST AND FURIOUS movie?

References To The Other Films

The F9 creators know who their fanbase is and lean into that in this film, with probably the most callbacks I have ever seen to the other films in the franchise. Quite frankly, if you haven’t jumped onboard by F9, you probably aren’t going to be spending the money to see this in theaters, and the filmmakers know that. Granted, that may also mean you don’t want to bring friends that haven’t been following the series closely, because there are many references and characters from previous films. Honestly, I would suggest watching some recap videos on YouTube to remind yourself what has been going on, because this film definitely builds on its predecessors and you may be lost without a refresher. I particularly appreciate that the F9 storyline allows Jordana Brewster to rejoin the team, despite her character’s ties to Brian (Paul Walker) and their “retirement” storyline following Walker’s death.

Again, I get that the whole point of a FAST AND FURIOUS movie is over-the-top action, and F9 really has dialed that up to next-level insanity, but I also miss the good ol’ practical effect car chases. I think it would be cool if the filmmakers sprinkled some action scenes that relied less on implausible, CGI-heavy action scenes and more on old-fashioned stunts from the incredible stunt teams, of course with exotic cars.

I don’t know what was going on with the editing in this movie. I assume they were trying to cut scenes to get the runtime down, but it made for some plot confusion at times. The storyline is already a bit more confusing than it needs to be in a film like this, but it certainly doesn’t help when there are issues with editing. The scene that jumps out to me the most is when the team is battling the military forces in the first big action set piece of the film, and all of a sudden the scene cuts to a meeting with Agent Stasiak on a plane. There is no explanation of how they ended up getting the team out safely and how they rendezvoused with Stasiak so quickly. Additionally, about 15-20 minutes could have been shaved off of the movie to make it feel a little shorter, because the action started to drag a bit in the middle section with all of the different magnetic car chase scenes.

Can someone explain to me why Charlize is only in the movie for about 10 minutes and is again stuck in a box/one room the entire time? This was my biggest complaint about THE FATE OF THE FURIOUS and here we go again. Did Universal not hear my pleas to #FreeCharlize? Of course, Queen Charlize made the most out of every single scene she is in. But her venomous dialogue, amazing wardrobe, and a haircut only she can pull off, left me begging for more screen time. Or at least something more than her trapped in a room Hannibal Lecter-style.

I Was Promised Helen Mirren

Speaking of strong female characters, another main draw for me in F9 was the promise of more Queenie (Helen Mirren). Mirren has been really hitting all of the talk shows to promote this film, so imagine my surprise when she was in the film for a total of three minutes. Now, they were an amazing three minutes, but I was left wanting more. Without giving too much away for the mid-credit scene, maybe that is indicative of more Queenie to come in the next edition of the franchise. Fingers crossed.