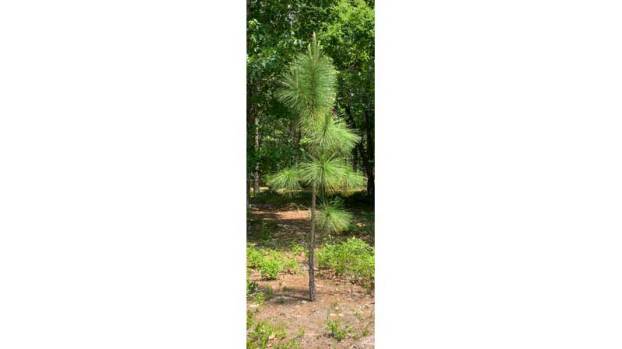 Restoring the land to longleaf pine

I was recently quite relieved when I realized that rather than being at the beginning of a 20-year project, I was actually in the middle of a 40-year one. That thought comforted me. And it is true we have already been working on restoring a piece of land, similar to restoring a house, to the way it was before the Europeans came, decimating the longleaf pine population because of its usefulness for ships’ masts and turpentine.

We had a 35-acre plot of land, “clear cut” 15 years before, and we were wondering what to do. It was a relatively circuitous route that took us through a number of government offices, agencies, and/or departments. It was difficult to find someone to help with experience in such a small operation. Most of what we ran into was geared toward bigger, commercial operations. At any rate, we finally got in touch with a young man doing his doctoral thesis on Virginia Native Longleaf Pine. We made a deal; I would prep some of the land for planting and he would bring a field trip of elementary school kids to plant the pines. And so it began.

For a number of years, I would make/take advantage of little spaces on the forest floor, plant a longleaf, and as it established itself, I would make that space bigger and bigger. Some of those first trees are 20 years old by now, and standing 25 to 30 feet high, which is pretty good, considering that they spend the first five years of their lives in a “grass stage” which looks similar to a clump of sedge. It is a fairly slow-growing tree. We were told that for the 60 years it takes to bring a longleaf pine to “maturity,” there can be two crops of loblolly. Although, one would get the same amount of wood from the one longleaf planting as from the two loblolly harvests. We had our first pinecones six years ago.

As I have continued to clear land and foster longleaf, my attention has shifted over the years to getting all the loblollies removed from our land. I want to reduce the chances of pollination between the longleaf and the loblollies. Shortleaf pine and Virginia pine can stay, as they are part of the original habitat. So, the last three years, we have been thinning the grown loblollies, managing the hardwoods for heating, and keeping the “solar panels sky” clear, giving rise to being at the beginning of a 20-year project or the middle of a 40-year one.

By Betsy Washington June is always an exciting month in the many freshwater wetlands in Northern Neck and beyond, as... read more