FRANKLIN – Vivian Claud Lucas, of Capron, departed this life on June 19, 2021. God in His infinite wisdom reached down and called her to receive her well-deserved reward. 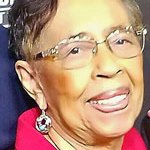 Vivian was born on Dec. 17, 1932 to Elizabeth Turner and Lee Claud of Southampton, Virginia. She was reared in the household of her beloved and nurturing grandparents, Deacon Sidney and Deaconess Corene Turner. She was predeceased by her mother, her grandparents and her daughter the Rev. Vickie Lucas Black.

Vivian was a life-long and dedicated member of Pleasant Plain Baptist Church and served on many ministries including the beautification club, missionary society and homecoming committee.

Vivian attended and graduated from Southampton Training School (Riverview High School) in Courtland, where she was a star basketball player. Upon graduation, she attended Virginia State College and later transferred to A&T State University where she earned a bachelor of science degree in physical education.

Vivian met and married the love of her life Calvin Lucas. This was a beautiful union full of love and life. Calvin remained her devoted and loving husband of 63 years. Calvin dedicated his life to her. He was her best friend, her main squeeze (Bae) and caregiver. They were blessed with two daughters, the late Rev. Vickie Lucas Black and Laurel Lucas Wood.

She was a well-loved and respected teacher. She taught at various schools within Portsmouth and Southampton County. She was a cheerleader sponsor. As a coach she led the girls basketball team to win many championships within two districts for many years. She ended her exceptional teaching career accepting a job guiding young inmates in the Southampton Correctional Facility in Capron. Reflective of her career, she was awarded Teacher of the Year while employed at the correctional facility. She worked with seniors in a federally subsidized program with Southeastern Virginia Senior Services. This program was designed to introduce seniors to recreational programs at the Martin Luther King Jr. Center.

Vivian was a member of the Nottoway Indian Tribe of Virginia. She was a Tribal Elder and Councilwoman Emeritus.

Vivian loved life and was a Golden Member of Delta Sigma Theta Sorority Incorporated. She was initiated into the illustrious sorority in the Portsmouth Chapter, secondarily joined the Norfolk Chapter and later became a charter member of Franklin Tri-County Alumnae Chapter in 1985.

A funeral service for Mrs. Lucas will be held on Friday June 25, at 11 a.m. at Move of God Ministries, 221 South Main Street, Franklin with the Rev. Louis Collins delivering the message; Apostle Tyrone Hart is the pastor. The committal and benediction will be held in the Pleasant Plain Church Cemetery.

If you would like to make a donation in lieu of flowers, you can make a donation to the Nat Turner Legacy Foundation, 17625 Pinopolis Road, Capron, VA 23829. A service with dignity will be conducted by Wm. M. Johnson & Sons Funeral Home, Inc., 224 South Main Street. Please share your condolences with the family at wmjohnsonandsons.com.