Benedict named to head up the department 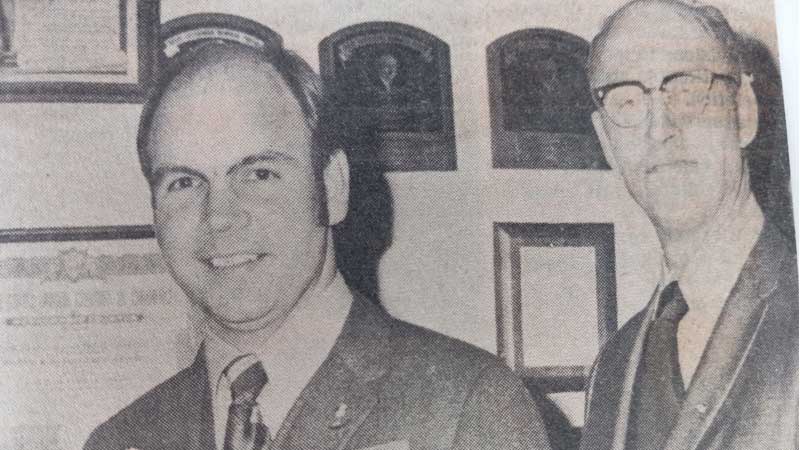 A special department that will devote full time to environmental protection has been formed by Union Camp Corporation at its Franklin/Isle of Wight facilities. John D. Munford, resident manager, said the new unit will assume and expand the environmental activities formerly included in the Process Engineering Department. “We must have a staff that can devote their full time to coping with the increasingly complex technology of pollution abatement equipment and methods as well as working with the many government agencies in the field,” Munford explained.

Technical Director, W. C. Chapman, who formed the department within his division, has named Eugene V. Benedict, Jr. to head the unit – called the Environmental Engineering Department. Benedict, 30, a professional engineer certified by the Commonwealth of Virginia, will have four engineers reporting to him. They are Richard M. Fogg, Alvin R. Hunter, Jesse L. Sinclair, and James B. Vaughan. A staff of technicians will also be assigned to the department.

Chapman said that the department will be concerned with water quality and the conservation and reuse of water within the plant, the continued prevention of water pollution in the Blackwater and Chowan rivers, the abatement and prevention of air pollution from the plant in the community, and monitoring pollution abatement facilities that are now functioning.

“We have a system of air sampling stations covering a wide area around the plant that will be utilized by this group and they will also be responsible for the river patrol operation,” Chapman added.

The river patrol operates from Burdette, on the Blackwater River, to below Winton, N. C., on the Chowan River, on a daily basis when effluent is discharged – usually in December, January, and February. Weekly patrols are run during the rest of the year.

Benedict will report to assistant technical director, Norman C. Shroyer. Chapman noted that the functions of the new unit have been a part of the program at Union Camp for years, “but we have formalized the program so that Benedict and his associates can work more effectively.”

Benedict has a degree in chemical engineering which he received at the University of Cincinnati in 1965. Originally from Troy, Ohio, he came to Franklin with Union Camp in 1965. His wife is the former Miss Peggy Agee of Christiansburg, Va.  They reside in Joyner’s Acres in Hunterdale.

Benedict was president of the Franklin Jaycees in 1968-1969 and led that organization, in 1969, to be named one of the top five chapters in the Commonwealth of Virginia. He just received the coveted “Boss of the Year” award presented by the Franklin Jaycees, following his nomination by several Franklin Jaycee members who worked with him at Union Camp.

Fogg, a Richmond native, came to Union Camp in 1970 after receiving his master’s degree in chemical engineering from the University of Virginia the same year. Mrs. Fogg is the former Miss Brenda Leake of Richmond.

Hunter received his degree in chemical engineering in 1965 from the University of Rhode Island. He is a native of East Providence, Rhode Island and joined Union Camp in 1969 after two years in the Chemical Corps of the U. S. Army.

Sinclair, a Hampton native, graduated from Virginia Military Institute in 1936 with a degree in chemical engineering. His wife is the former Miss Willie Rountree of Suffolk. He joined Union Camp in 1938.

Vaughan came to Franklin from Western Michigan University in Kalamazoo, his hometown. He had received his degree in pulp and paper technology and chemistry in 1968, the year he joined Union Camp. His wife is the former Susan Finch, also of Kalamazoo.

Chapman said that the department will begin its functions immediately.

Benedict said his environmental unit will be responsible for air and water pollution monitoring, some design work, and making anti-pollution recommendations to management for the enhancement of air and water quality.

The five-man unit will devote 200 hours a week to environmental questions. In addition, several technical assistants will be involved with certain assignments, benedict explained.

When asked about the changes that the residents of the Isle of Wight-Franklin-Southampton region could expect as a result of Union Camp’s formation of a full-time environmental team, Benedict, in response, stated, “For one thing, we’ll see less smoke; and, in time, there will be less odor. It will take time, but probably within the next five years, we’ll see significant improvements. The problems are related. It’s all called enhancement of air quality.”

Changes are also forecast for the Blackwater River. “We’ll improve water quality,” Benedict said. “Right now, I don’t know what steps we’ll be taken. I know there has been pressure from North Carolina and pressure from other areas, but it hasn’t been worked out yet with the state on just what we will be doing.”

Union Camp says it has, for a long period of time, made financial investments and have taken significant steps toward environmental management.

“The company’s corporate offices in Wayne, New Jersey are looking at this sort of thing,” Benedict explained.