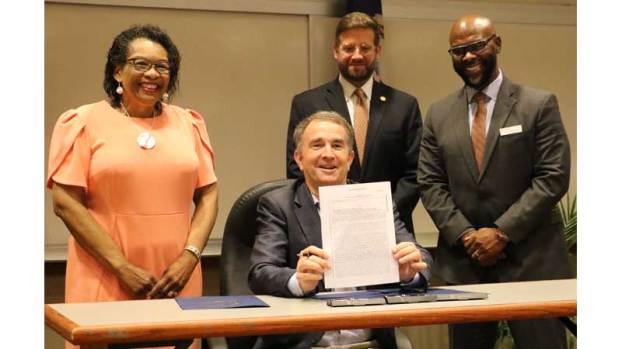 Virginia Gov. Ralph Northam holds up a bill he had just signed that will help expand broadband in the state. Joining him at the ceremonial signing at Camp Community College’s Workforce Development Center on June 9 are, from left, Del. Roslyn C. Tyler, chief patron of the bill in the House of Delegates; Evan Feinman, the governor’s chief broadband adviser; Dr. Corey McCray, Camp Community College’s interim president. (Photo by Titus Mohler) 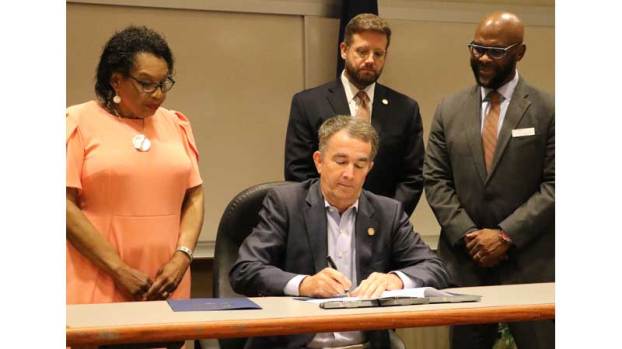 According to the summary of House Bill 2304, as passed, the legislation makes permanent the pilot program under which a Phase I or Phase II electric utility is permitted to petition the State Corporation Commission to provide broadband capacity to unserved areas of the commonwealth.

The bill expands the program to allow for the participation of municipalities and government-owned broadband authorities, the summary stated. The bill provides that investor-owned electric utilities may recover costs of and revenue generated from providing broadband capacity that serves as an electric grid transformation project in areas unserved by broadband, as defined in the bill.

The bill also consolidates the State Corporation Commission petition approval process into one hearing, the summary added, noting this bill is identical to Senate Bill 1413.

Del. Roslyn C. Tyler, who represents the 75th District and was chief patron of this legislation in the Virginia House of Delegates, was present at the Workforce Development Center on June 9, along with Evan Feinman, the governor’s chief broadband adviser.

“What this bill does is it allows us to work together,” Northam said.

Before introducing the governor, Feinman shared some of Northam’s notable accomplishments in expanding broadband during his gubernatorial term, but he indicated that all those achievements come in second now to this latest one — HB 2304/SB 1413.

“The best single thing that we have done in the course of all of this work is the bill Gov. Northam’s about to sign here today,” Feinman said. “Bringing [American Electric Power] and Dominion into the broadband program is good for electric grids, it’s good for ratepayers, and it’s good for getting more Virginians online.

“It’s a win-win-win, and this bill today makes permanent a pilot program that we just got started a couple of years ago that has already led to universal coverage projects in more than five counties, with more than a dozen in the queue right now to get approved at the State Corporation Commission,” he added. “This is huge. There are tens of thousands of folks who are going to get online as a result of this.”

He thanked Del. Tyler and also Sen. Jennifer Boysko, who he said apologized for not being able to make it to the signing. Boysko was the chief patron of the bill in the Virginia Senate.

During her remarks at the signing, Tyler said that recently she has been going around to local governing bodies in the Capron, Brodnax and Courtland areas.

“And when I talk to different constituents, you know what they say all the time?” she said. “I say, ‘What do you need?’ They say, ‘Broadband.’”

For clarity, she defined the term, noting broadband is high-speed internet.

“Talking to local elected officials, we know that broadband is a necessity for economic development in our area,” she said. “We can’t do without it.”

She explained that when businesses come to the area, they look for water and sewage connections, and then the next thing they look for is broadband accessibility.

“And so I was proud this year to introduce this piece of legislation that will expand broadband accessibility across unserved areas in the commonwealth,” she said. “But we have to take advantage of the opportunities … You have to apply for the money.”

She encouraged localities to be creative in order to get the funding that is necessary.

She also emphasized the importance of partnerships in expanding broadband.

“We’re talking about partnerships because we know local governments cannot afford to do it by themselves,” she said.

Northam, Tyler and Feinman all underscored the importance of partnerships by virtue of their offering thanks to all involved in the new legislation, including the utilities, the cooperatives around the state, the broadband providers, local leaders and each other.

The governor noted how expensive it is to get broadband access to the “last mile,” which is a term that essentially refers to the distance from the last point of a product’s supply chain to the customer. In this case, the product is high-speed internet access.

Northam thanked Dominion Energy and Appalachian Power for their efforts to help expand broadband, noting Dominion has projects in Surry County with RURALBAND.

“We know how expensive it is to get to that last mile, and the way we’re going to do that is by working together and by having the resources to do that,” Northam said. “So we’re committed to doing that.”

“When it started in 1920, about 35% of the population had electricity, and it’s just like broadband — everybody needs it,” Northam said. “And so they really pushed hard back in the 1920s and within a few years got up to 90% of folks having electricity, and we can do that here in Virginia. We want to be leaders, and we’re, I think, really in a good position to do that.”

He said when he started as governor in 2018, Virginia was putting about $4 million a year into broadband expansion efforts, and he and his administration later raised that to around $20 million.

“This year, in our budget — and we have the resources to do it — we’re putting (in) $50 million a year over two years, we’re also adding $30 million from federal funding, and then we have the (American) Rescue Plan, which we’re actually working on now, so there will be more coming into broadband, but we’re not holding anything back, and I wanted you all to know that,” he said.

Highlighting why broadband is important in 2021, Northam mentioned, like Tyler did, how it is required for bringing in businesses, how it is necessary for enabling virtual learning for students, and he also emphasized the tremendous impact it has had on the health care field, from which he comes.

“As a physician, all of our patient contacts prior to COVID-19 were face to face,” he said. “People came into the office or into the hospital. Well now, about 75% in our office in Norfolk are through telemedicine. Again, that works well if people have access to the internet, but when they don’t, you can’t communicate.”