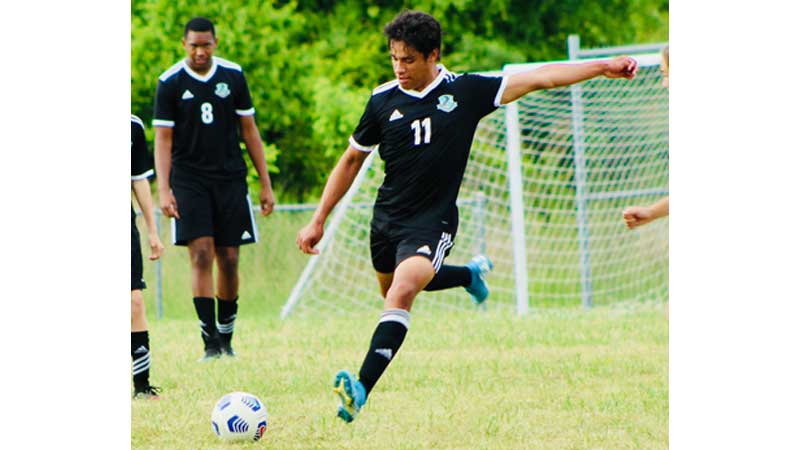 The Rock Church School Lions varsity soccer team moved to 10-0-1 on the season after winning against the Southampton Academy Raiders recently in a hard-fought, rain-infused contest.

Rock Lions sophomore D.J. Dillon had a phenomenal game and finished with three goals and one assist, completing the hat trick. Christian Fanjul scored two goals, and Jack Dillon had one assist.

Southampton Academy has been a rival of the Rock Lions for years, and this most recent showdown was highly competitive, even if the score did not indicate it.

“I was excited about playing the Raiders,” Rock Lions Coach Danny Dillon said. “They are one of the elite teams in their conference every year. The Raiders’ coach, Jamie Weist, is one of my best friends, and we coach a lot of these players together on the Franklin Fire Soccer Club teams. Proud of players from both teams. They represent this area on such a high level of soccer, class and sportsmanship.”

Last week, the Rock Lions beat Greenbrier Christian Academy by a score of 10-2.

“It has been a special year so far,” Coach Dillon said. “I’ve coached a lot of teams at Rock Church School and Franklin High School; this one ranks right up there as one of the best. But really what makes them special is the love they have for God, and the fun they have on the field. I’m approached after every game from opponents’ parents, coaches and players about how much they enjoy playing us. That’s what Rock soccer is really all about.”

The Rock Lions have a few more games left in their abbreviated season, and they hope to finish out undefeated. Their next game is against Brunswick Academy.