FRANKLIN – Benjamin Stuart Vincent, 92, of Franklin, passed away Thursday, May 27, 2021 at his home in Harrisonburg. 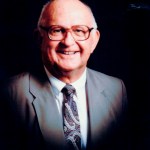 Stuart was born in Emporia on June 26, 1928, the son of the late Stella (Hobbs) and Posie Meade Vincent. In addition to his parents, he was preceded in death by his son, Benjamin Thomas Vincent.

Stuart graduated from Emporia High School and was president of his class, coordinating reunions for over 50 years. He received his bachelor’s degree in mechanical engineering from Virginia Tech and was an avid Virginia Tech fan during the non-winning times, as well as the winning times. Stuart served his country in the U.S. Army during the Korean War.

Stuart started his career with the Home Telephone and Telegraph Company. He continued to work for the Contel Telephone Company for 42 years, working in Emporia, Harrisonburg, Warsaw and Franklin until his retirement from Verizon. He was a former president of the Virginia Independent Telephone Association. Stuart was active in the Boy Scouts as a young man and as an adult, earning the Eagle Scout award, the Silver Beaver award, the Distinguished Eagle Scout Award and serving as a scoutmaster and council member. He was known as a “Mr. Fix-It” for telephones, electrical devices, clocks and almost anything broken. For most of his life he played tennis and was a Rotarian. He was an active member of the High Street United Methodist Church in Franklin.

A memorial service will be conducted at 12:30 p.m. on Tuesday, June 1 at the High Street United Methodist Church in Franklin, with the Rev. Nathan Decker officiating. Burial will be private.

In lieu of flowers, memorial contributions may be made to High Street United Methodist Church, P.O. Box 218, Franklin, VA 23851.

Online condolences may be shared with the family at www.johnsonfs.com