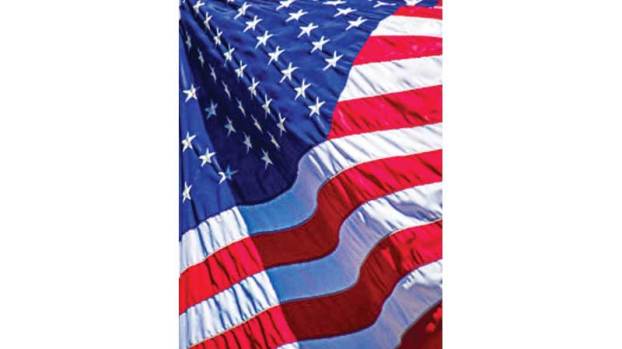 State and local flags are traditionally flown lower than the American flag.

The United States flag was first imagined after the signing of the Declaration of Independence in 1776. The Continental Congress authorized creation of the first national flag on June 14, 1777. It was decided that the flag should have 13 stripes, alternating red and white, to represent the original 13 colonies, and that the new union be represented by 13 white stars in a blue field to signify a “new constellation.” Francis Hopkinson, one of the signers of the Declaration of Independence, is most often credited with the original design.

Today there are 50 stars on the flag to represent the 50 states, while the 13 stripes still represent the 13 British colonies that became the first states. While this may be common knowledge, Public Law 94-344, known as the Federal Flag Code, may not be as widely known. The code dictates that the flag is to be treated with respect and proper etiquette. The code is extensive, but the following guidelines can help private individuals interested in displaying their flags do so in accordance with the law.

• Flags should only be displayed in public from sunrise to sunset, unless the flag can be properly illuminated during darkness. In this instance, it may be displayed at all times.

• State and local flags are traditionally flown lower than the American flag.

• During marching ceremonies or parades with other flags, the U.S. flag should be to the observer’s left.

• The flag should be displayed at every public institution and at schools during school days.

• When displayed vertically and not on a staff, the union should be on the left when observed. It should be suspended so its folds fall freely as though the flag were staffed.

• The flag should be hoisted briskly and lowered ceremoniously.

• The flag is often displayed at half-staff on days of mourning, including Memorial Day. The flag should first be hoisted to the peak for an instant, then lowered to half-staff position, which is half the distance between the top and bottom of the staff.

• On a vehicle, the U.S. flag should be displayed from a staff firmly fixed to the chassis. It should not be draped over the hood, top, sides, or back of a vehicle.

• The flag should never touch anything beneath it, such as the ground, the floor, water, or merchandise. It also should never have anything placed on it.

• A flag in poor condition should be destroyed with dignity, preferably by burning. Most American Legion posts and local Boy Scouts troops will have the resources to retire flags accordingly. Many will host annual flag retirement ceremonies on Flag Day.

Last week I unlocked my front door, walked into the kitchen and was brought up short by the appearance of... read more