The Western Tidewater Health District has gone all out this week to make sure citizens have opportunities to receive the one-shot Johnson & Johnson COVID-19 vaccine.

The health district hosted 13 free mobile vaccination clinics starting May 24 and continuing through May 30, targeting rural and underserved areas with limited vaccine access. Clinics in Windsor and Ivor were held May 24. Clinics were held in Courtland and Holland May 25, Boykins and Dreweryville May 26, Franklin and Newsoms May 27, and Franklin and Carrsville May 28. Additional clinics will be held in Suffolk May 29 and in Whaleyville and the Chuckatuck area May 30.

Western Tidewater Health District Director Dr. Todd Wagner said there will be little infrastructure around each event, other than the vaccines and the people administering them.

“The larger number of folks needing vaccination in larger pools or pockets has dwindled,” Wagner said, “and we don’t want to miss the opportunity to really hang the shingle in some of the more remote areas where literally, those people, for whatever reason, are just not going to areas, whether it be pharmacies or clinics or health departments and they just want to go down the road to get their vaccination.” 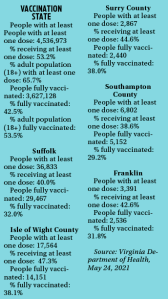 Each clinic will administer between 50 to 100 of the one-shot Johnson & Johnson vaccine. No appointment is needed, as people wanting the vaccine can simply show up at a clinic and receive it. However, people who want to make an appointment are welcome to do that online at vaccines.gov.

“Even though the numbers aren’t large, it’s equally important to get those people that, for whatever reason, desire a vaccine but just aren’t getting it,” Wagner said.

The state health department has more information about the Johnson & Johnson vaccine at www.vdh.virginia.gov/content/uploads/sites/191/2021/05/JJInformation.pdf. They also suggest contacting your doctor for more information.

It is touting the convenience of needing just one shot “while you are already out and about.”

“We’re not concerned with big numbers or big lines,” Wagner said. “We’re not expecting that. It’s to be a trickle, probably, but (for) three-hour blocks both during the day and after hours, folks can take advantage of it.”

More than 4.5 million people in the state have received at least one dose of a COVID-19 vaccine, representing 53.8% of its population.

More than 3.6 million people statewide are fully vaccinated, representing 43.2% of its population.

Wagner believes it is due to a combination of vaccine hesitancy and those in more remote parts of the district being further away from vaccination sites. He said the district’s vaccination percentages are comparable to other rural districts that are having similar challenges.

The health district is trying to work with community groups, Wagner said, to help quell some of the distress people may be having about the vaccine.

“It really is trying to make those logistics easier,” Wagner said, “just making it available, just educating people when they actually hear about it from a medical professional rather than online, (they’ll) say, ‘I think I will get the vaccine.’”

A discussion addressing food insecurity and its root causes