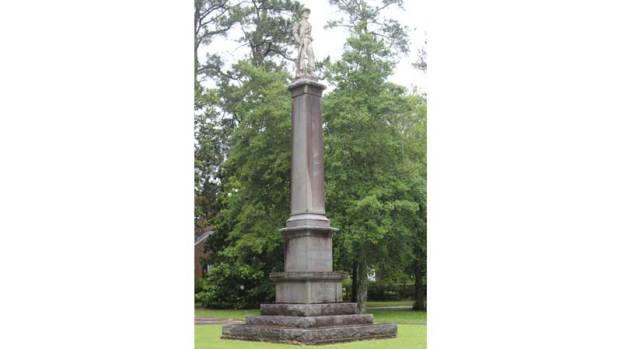 The City of Franklin’s Confederate monument that has stood in the park between Clay Street and Meadow Lane for more than 50 years is expected to be moved in mid-June. (File photo)

Monument expected to be moved in mid-June

Franklin City Manager Amanda Jarratt revealed during the May 24 City Council meeting that the city’s Confederate monument, standing in the park between Clay Street and Meadow Lane, has a contractor for its relocation and is expected to be moved in mid-June to Poplar Springs Cemetery.

“The low bid came in at $35,000 or just over that, which is great,” Jarratt said. “You all had allocated $60,000 as a budget for that. So there will be a few additional expenses with the pad that has to be poured, but I’m thrilled that it came in at that price point.

“So we anticipate that that will be moved in mid-June based on the contractor’s schedule and having the pad at the cemetery poured in advance for the monument to be moved,” she added.

She said the low bidder was Hampton Roads Rigging.

The City Council voted 6-1 on Sept. 14, 2020, to relocate its Confederate monument from its place between Clay Street and Meadow Lane, where it has been for more than 50 years, to the cemetery.

As The Tidewater News previously reported, city staff has demolished a gazebo in the cemetery and plans to build a concrete pad in its place large enough to accommodate the monument. After receiving — and rejecting — a bid of $95,000 from E.T. Gresham Company to move and re-erect the monument, the council voted 6-1 on March 22 to set a maximum budget of $60,000 for the relocation and re-bid the project.

A discussion addressing food insecurity and its root causes