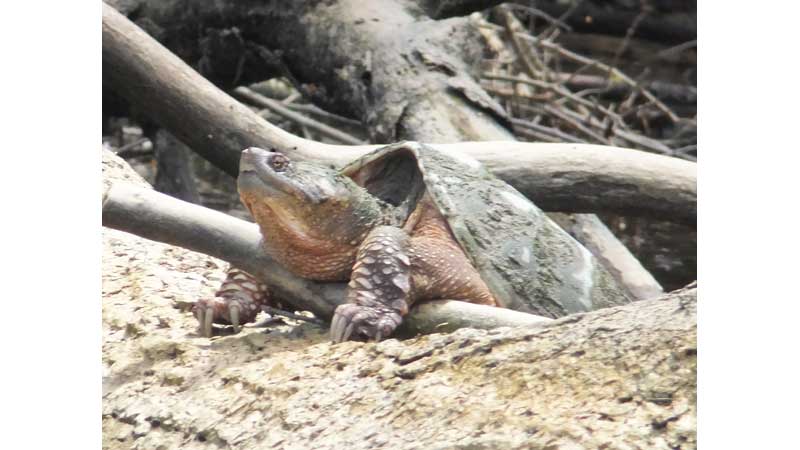 Spirit of Moonpie and I spent the 13th through the 15th on the Nottoway below Delaware. The water was nasty on the surface, clear and 61 degrees. Air temps ranged from 41 to 75 degrees. Trash was light, but I did remove a large plastic kneeboard-type thing from the river. Moonpie wanted me to pull her on it behind the boat, but the bottom was busted out, so I had to snuff that idea. I also removed and reported several abandoned limblines and reported others that were not being fished daily as required by Department of Wildlife Resources regulation. The only other problem I encountered was some idiot went screaming wide open through the Narrows and didn’t see me till he was right at me. Good thing I was not in the pontoon boat coming through there or I’d have his teeth as a front deck ornament.

The fishing on this trip was great. I caught a lot of bass to 2 pounds, several chain pickerel and a lot of very nice bream. Most of the fish were caught on a white tail Mepps and a jerk bait. Also, there was one very large blackfish that caused a mess with my tackle. All of the bass had eggs in them.

On the second day I picked up Whispering Bear and took her on a wildlife photo shoot. We saw a bunch of different critters, including a hawk, an osprey, a deer, several great blue herons, prothonotary warblers and common yellowthroat warblers, beaver, a very large snapping turtle, dozens of other turtles and snakes everywhere. In fact, most of the snakes were doing the snake lovefest thing and were all balled up in the trees.

So, it was a great trip, and I was lucky to get one more land-based run in before I jump to pontoon-based patrols. I had already switched all my gear etc. over to pontoon mode but could not turn down one more opportunity to go on land. I got lucky that the skeeters were not too bad and the weather great, a little warm for me to be on shore, but it was OK and did me a world of good to be back out there. So now I’m looking forward to fishing for some big cats on the pontoon boat next time out on the two rivers we call the Nottoway and Blackwater.

JEFF TURNER is the Blackwater Nottoway RiverGuard. To contact Jeff about river issues, email him at blknotkpr@earthlink.net.