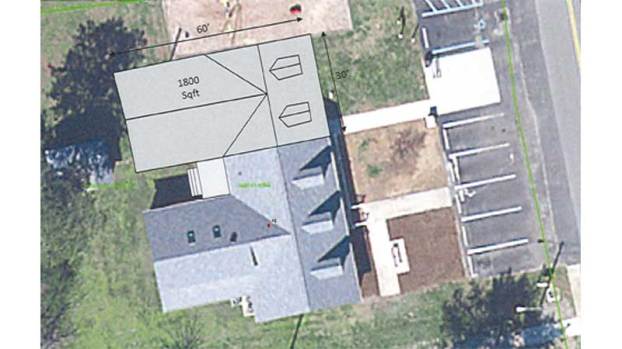 The proposed expansion to the Windsor Public Library of approximately 1,800 square feet with a storage room above will be an addition to the north side of the existing building.

The project to significantly expand the Windsor Public Library structure on Duke Street received the approval it needed from the Windsor Town Council on May 11.

Council members voted unanimously to enter into an agreement with Isle of Wight County whereby the town authorizes the county to expand the library structure on town-owned property.

“I know it’s been something that many in town have pushed and done a lot of hard work to get it in place and get the county to allocate the budget for that,” Mayor Glyn Willis said during the May 11 meeting.

Windsor Town Manager William Saunders noted in a memorandum to the mayor and Town Council that after requests for the improvement and/or enlargement of the Windsor library facility, Isle of Wight County has programmed funding for an expansion of the library into its fiscal year 2020-21 Capital Improvement Plan and is currently working on the site plan and design of the structure.

Saunders stated the proposed expansion of approximately 1,800 square feet with a storage room above will be an addition to the north side of the existing building.

It is because this project is set to take place on town-owned property that it required the approval of the Town Council, he added.

The Windsor Weekly previously reported that the expansion, which will roughly double the size of the building, was slated to cost $350,000, and the work will include adding a branch manager’s office, meeting space and storage.

Donald Robertson, assistant county administrator for Isle of Wight, said the project is still on the front end of the design process, so the county does not have any projected dates for construction just yet.

“A lot of things have changed and gotten in the way this year, one being the cost of construction right now, the other is the availability of contractors,” he said. “We’re still a ways off from even delving into that further, but right now it’s just a matter of getting the design work done. But we’re still hopeful that we can do the project as soon as possible.”

The May 17 public hearing with regard to Southampton County’s fiscal year 2021-22 budget brought a variety of subjects to... read more